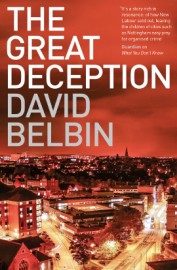 David Belbin has given us the pleasure of another marvellous novel: The Great Deception. After Amazon’s bestseller Bone and Cane and What you don’t know, Belbin strikes again to continue his exciting crime series. In sticking to his roots by placing the setting partially in Nottingham, the author adds a personal touch to this story. By including an omniscient narrator who is able to look into the thoughts and feelings of his characters, he underlines this personal touch and lets the reader bond with them. As one of the main characters – Nick Cane – is a former teacher, it seems like Belbin is telling his own story or that of a colleague from Nottingham Trent University. Due to such connections to the author’s life, the characters seem more authentic.

Each chapter in the novel elaborates upon a line of action from a different perspective, these chapters slowly adding up, like the pieces of a puzzle, to a whole story line. The strong connection between the main characters, Sarah and Nick, is what keeps the story together. By switching perspectives, the reader can only engage with what that character is facing, which calls into question whether the narrator is reliable or only telling us one part of the truth.

For instance, when Andrew, a friend of Sarah and Nick, is accused of being responsible for an abduction, the reader does not know whether to believe Andrew or the others; it is his word against theirs. Only by receiving Andrew’s final perspective, is the truth finally revealed.

The deceptions between the characters are endless. They extend from adultery to cover-ups between politicians, spying and lying. Almost all of the characters have one thing in common: they have secrets that should be kept. Judging from Nick’s reaction to the comment from one of his former girlfriends, Nancy, that “We all have our little secrets, eh?”, he seems to feel uncomfortable keeping secrets and lying. Both of the two main characters appear to be uncomfortable with keeping secrets. This can also be seen in Sarah’s character. As she states, when we lie, “We hurt ourselves every time we do.” Especially, when she finds out a secret about Nick’s current girlfriend, she is eager to tell him but cannot. The biggest secret of all is revealed in the end when an important figure introduces it with, “I’ve always wanted to thank you for keeping my secret all those years.”

The themes throughout this story are not, as one would think, mainly about crime. Besides drug trafficking and undercover police work, there is also politics, sexuality, relationships and the theme that keeps it together and frames it all: love. In line with these themes, Belbin includes literary and political references to figures such as Othello and Bill Clinton, to make the reader relate the story to his own world.

Amongst all these themes there is one that is common to all the characters: betrayal. This is enhanced by the reference to Othello, “Precious villain, Othello called Iago after discovering his betrayal.” The only figures that seem incapable of such character traits are Sarah and Nick: “The amount of deception involved in undercover work required a mind-set that Sarah couldn’t imagine.” Nick’s actions usually speak louder than words, his response to an open relationship was, “Tried it once, felt guilty whichever one I was seeing.”

This novel involves a lot more than simply solving crimes. However, the grand question is: what can the reader actually believe in The Great Deception?