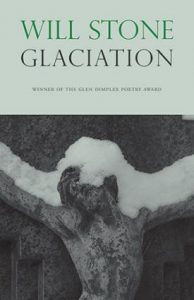 On picking up Glaciation by Will Stone, my first thoughts were of death and religion in an Ice Age setting. This was prompted by the ice-covered sculpture of Christ on the front cover, and a quotation from Percy Bysshe Shelley seemed to confirm this assumption, “The glaciers creep like snakes that watch their prey, from slowly rolling on; […] A city of death.”

However, the 2008 winner of the Glen Dimplex Poetry Award has shown us a very different interpretation of glaciation in this, his most recent poetry collection. In The Guardian, Sarah Crown has noted how Stone transfers these icy features to “his jarring vision of a profligate civilization trapped in a fatally debased environment.”

Inspired by Michael Hamburger, Stone continues the elder poet’s legacy by critiquing the inconsiderate manner of our profligate society while simultaneously contrasting those perceived failings with landscapes. Stone not only adopts Hamburger’s themes for his poems, but he also dedicates his newest edition of Glaciation to him.

Consider his first poem “The Oaks”; while Hamburger has mourned “the hedgerows “slashed” to allow trucks “grown cottage-sized” to pass unhindered” in his poem “From A Diary of Non-Events – January”, Stone puts the hedgerows aside, as with the rest of nature, claiming that its “dewy blooms deceive us.” In the younger poet’s view, the beauties of nature are all we seem to recognise, but they divert us from the real issues.

Society, including the reader, is taken to task for being unable to see nature for what it really is: powerful, enduring, pervasive and outgrowing us all, just as the oaks depicted to in his poem. In Stone’s description, they appear majestic, “they begin to command, take over, / they rope in the hedgerows, they deepen.” When mentioning “our wake” in the last line, the poet does not only offer an image of death, but shows also that nature outlives us – it always has and always will.

Death reappears in many poems throughout Glaciation and its thematic threading throughout is interesting. Combining death with nature gives the poems a romantic touch – as that pairing is indeed a pervading theme of that genre. In addition, by moving away from a reliance on regular metre and rhyme schemes, Stone plants these themes firmly in the terrain of contemporary, free verse poems.

However, these poems are far from being simply a walk down the lane. In poems such as “Russian Fair Play”, Stone investigates diverse cultural aspects in exploring different nationalities and historical events. In interrupted sentences and cut short lines, he describes how brutally “ a band of Russian troops / captured an SS Scharführer”, to whom they “showed no mercy”; this allows the reader to be part of this frightening situation, also subject to a demand made by a Russian in the poem,” Play you scum.” The word “fair” in the title does, of course, reflect the poet’s intended irony. Stone’s linguistic borrowings in this and other poems lend an authenticity to his writing of worlds beyond his locality.

Stone’s collection is wide-ranging, encompassing the apocalypse, cancer, the rubbish we produce, war, affairs and death; these are framed by those oaks, blooming in May and that same tree showing signs of winter in “October.” All of his social commentary is set in deliberate contrast to the enduring power of nature. Glaciaction asks the question: Have we learned from our past mistakes and are we ready to live in the right manner now?

Will Stone’s dramatic poetry combines striking, precise images of our world, and shines a light on what truly deceives us.