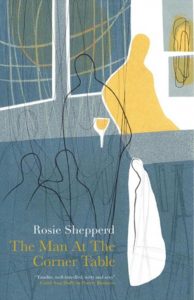 When reading poetry I have a habit of dog-earing the most affecting pages. Unfortunately for my edition of Rosie Shepperd’s The Man at the Corner Table, I’ve dog-eared damn near every page. Shepperd trained as an economist and has worked in finance throughout the UK and the US, all the while publishing poems in the US, the UK, Ireland and France. She was shortlisted for the 2014 Forward Prize and has won a number of other prizes.

What struck me in her poetry was her ability to isolate the nuances of surroundings to bring her reader’s perceptions to the forefront of a scene. The majority of this collection’s poems are akin to cinematic exposition shots, showing foreign locations to her reader.

A few families sit around like spoons,
the softness in their words mixes with sounds
of the evening, the heat and the beach.
they smile into small jugs of oranges
floating in sweet, spiced wine. (“Chorinho”)

Arguably, any poet can write a poem with prevailing sounds, but it takes a craftsman like Shepperd to give the reader the heat, the passion and the sizzle of a Brazilian beach. The “s”s build in anticipation of the “spiced”. “Sweet” and “spiced” with their terminal “t” sounds create a stammer in the line’s rhythm. Throughout the poem there is only the merest hint of rhythm, but listen to Waldir Azevedo’s Brasileirinho and “sounds of the evening” makes perfect sense. And still there is charm simply in her simile. I did not know that people could sit around “like spoons”. That might read initially like an insult and yet, when re-read, its slightly surreal image suggests the intimacy and warmth of a father holding a mother from behind as she might her child, or recalling people sitting on a motorbike.

The collection has quite an obsession with food. Every single poem in The Man at the Corner Table alludes to food :

The chef at Suntory considers sea bream for (maybe) ten seconds.
He selects yellowfin with absurd red flesh,
smiles at the silvery scales;
the dark lines on her back smile back.
(“Somewhere I read that a thought can be exaggerated…”)

This is Shepperd at her most comfortable, bringing a scene to life. As she said in an interview; “there’s a deliberation in my enjoyment of tastes which is very similar to my enjoyment of words and images”. That very sensory relish is so often missed in poetry and Shepperd brings that frequently omitted opportunity into the reader’s domain.

While I praise Shepperd’s ability to develop a long exposure of any scene, the poem belonging to the most dog-eared page is “the idea of buying a hat for you…”. I won’t quote from it as it simply does not work in out-of-context segments. This pivotal poem stands outs beautifully in the middle of the collection. From the title onwards, the poem’s run on sentence takes sharp aim at how we spend hours musing about doing something, only to not do it at all. This is a blindingly insightful stab in the middle of her collection.

Despite the time it took me to lean into her poetry, Rosie Shepperd’s The Man at the Corner Table is rich and vibrant, new enough to interest, but sufficiently grounded to be believable. Every meal is a poem, and every poem is a meal. Should you ever feel the need to imagine Brazil, read “Chorinho”.