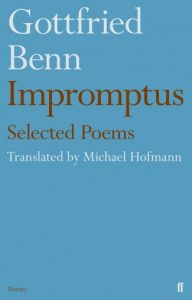 I have often asked myself and never found an answer
Whence kindness and gentleness come,
I don’t know it to this day, and now must go myself.
(“People Met”)

Before the carnage of Benn’s early poetry, Michael Hofmann offers an insightful, engaging, funny and enjoyable introduction into Gottfried Benn’s life and extraordinary career. He describes Benn the military man in the First World War, the colonel and doctor, the philanderer and the man who flirted with National Socialism (briefly). Hofmann does not obfuscate the fact that Benn was a pessimist who somehow ended up fighting – or for the most time writing poems – in the German army during World War Two. Gottfried Benn is one of the best-known 20th century poets in the German-speaking world. So it came as quite a shock that Benn is almost unknown to English readers. This little volume has what it takes to change this appalling state of affairs.

One of the first things I experience in a poetry book is how it feels: its weight, the feel of the paper, the typeset. All these things are fundamental. This collection comes in a perfect package, not too light, not too heavy. The font is clear, precise and elegant. But there is a touch of romance, some lightness in the cover’s off-baby blue that to me represents the unique flavour of Benn’s cold-melancholic precision. His poetry is usually considered to be expressionist, fragmented, direct and simple, but first and foremost it is provocative, raw and chilling. In his verse, Benn dissects life’s wounds and mankind’s shortcomings with a military doctor’s razor-sharpness; his clear eye for life’s ugly underbelly and his keen razor-sharp words are lead and directed by a melancholic passion and a misanthropic outlook.

Crises of expression and spasms of eros:
that’s the man of today,
the inside a vacuum,
the continuity of personality
held together with a suit,
which with stout cloth might be good for then years. ( “Fragments”)

I have to admit that I am always on the fence when it comes to translations. It is true that translations are inherently problematic; despite being a wonderful chance to experience something one would have no access to without the translation. What makes this instance even worse is that Benn’s work and especially his well-known “Kleine Aster” (“Little Aster”) are some of the first poems I deeply loved – and detested – so it is very difficult to look at the translation without the feeling that there is something missing. “Little Aster” is the second poem in the collection and one of his best-known poems. It concerns a drayman being hoisted on Benn’s dissecting table. A little aster is wedged between the corpse’s teeth:

A drowned drayman was hoisted on to the slab.
Someone had jammed a lavender aster
between his teeth.
As I made the incision up from the chest
with the long blade
under the skin
to cut out tongue and palate,
I must have nudged it because it slipped
into the brain lying adjacent.
I packed it into the thorax
with the excelsior.
when he was sown up.
Drink your fill in your vase!
Rest easy,
little aster.

The cause of the death is identified: he is “ersoffen”, a rather brutal expression for drowning, which brings to mind drunken brawls, the loss of control and rats. In the translation this expressive verb turns into a simple “drowned”. The lavender aster someone has jammed into his mouth in German is a breathtakingly beautiful “dunkelhellila”. This is Benn’s creation and literally translates as “dark-light-lilac”. Undoubtedly, it is a shame that the readers of this translation will never be acquainted with this extraordinary contradiction of a colour. That said, reading the other translations, the poems reminded me of Gottfried Benn, just that it was a somewhat tamer, a more pragmatic, a more sombre Benn – but maybe also a more approachable Benn – then the one I know, love and hate: the Gottfried Benn that uses a corpse as a flowerbed so that beauty may rest.