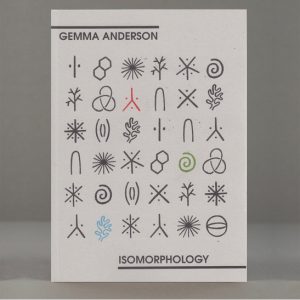 During her time as a student of Fine Art Printmaking at the Royal College of Art in London (graduating in 2007), Gemma Anderson developed a unique and intimate working relationship with the curators of scientific collections at the Natural History Museum, University College London and Kew Gardens. The extensive access she was granted to a plethora of zoological, botanical and mineralogical specimens allowed her to devote attention to the drawing and study of the intricate organic forms, structures and patterns evident within these jewels of nature.  As a consequence of her patient and highly detailed studies, Anderson began to recognise repeating similarities between the symmetries, arrangements and shapes of the specimens before her.  She designed her own classification system based upon these observations, and coined the term which is also the title of the book, ‘’Isomorphology’’.  This term, devised from Greek etymology and the biological and mathematical concept of isomorphism, perfectly encapsulates both the scientific study of form and structure, and a more visual approach to the depiction of similarities between unrelated species and specimens. The publication of Isomorphology follows on from a visual guide entitled Isomorphology: An Introduction (2013) produced by Anderson in collaboration with Super/Collider Press during her PhD studies at the University of the Arts in London.

From the outset, Anderson introduces fundamental scientific terms associated with her topic in a clear and concise manner, with highlighted definitions within the body of the text. These definitions are combined initially with simple black line drawings to conceptualise the primary forms and symmetries evident within nature, thus providing the basis for further discussion.  These drawings become gradually more complex as the topic of isomorphology is elaborated upon, with the introduction of colour and layering.  Simple schematic illustrations are also introduced in order to relate these line drawings to recognisable animal, plant, mineral and even human examples. The effective marriage of both text and visual aids amply supports the author’s intentions to communicate both the scientific details of isomorphology and the aesthetic beauty of the biological samples studied.

Although the more simple drawings undoubtedly possess an innate allure of their own, it is the infinitesimal detail and intricacy of the prints of copper etchings interspersed throughout the text that are the highlight of Anderson’s work. Initially drawn from specimens from the Natural History Museum’s collections, each print depicts a scene from nature that is immediately recognisable to the reader.  From the starting point of that accessible context, the more elusive aspects – the various forms and symmetries discussed – are made apparent.  For example, the concluding print of the book portrays a scene of delicately interwoven porcupine fish, dandelion seed heads and ball-like iron pyrites that are clearly illustrative of the spherical form.  Furthermore, both six-fold symmetry and hexagonal forms are also beautifully represented in a print of honeycomb and crystals, and the complexities of the hyperbolic form are defined in a scene of intertwined human tissues, garden lettuce and aragonite.  Resembling the intricate natural science illustrations of textbooks and museums, Anderson skilfully highlights the importance of abstraction in detailed observational drawing which not only provides a more holistic approach to the classification and study of specimens, but also piques the interests of both scientists and creatives alike.

In summary, Isomorphology provides a succinct introduction to the identification of similarities in form and symmetry abundantly present in nature, and successfully brings art and science together.  That marriage of disciplines is managed harmoniously, without the use of complex scientific jargon nor with the insult of over-simplification.  On a more practical level, the small and concise nature of this delightful little book allows it to become the perfect accompaniment to one’s own investigations of the natural world.