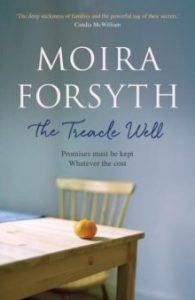 Moira Forsyth’s The Treacle Well is a novel which encapsulates the very essence of human nature when tragedy befalls. Penned with a remarkable understanding of emotion, this non-linear piece of prose mixes together the ingredients of realism and pathos to drive forward a fascinating and compelling plot. Through a series of lapses in time, the present quickly becomes the past and lingers like a distant memory that plants itself with such realism in the reader’s head, that as the plot progresses and the characters move forward, the reader is forced to move forward also. Perhaps her greatest strength is that Forsyth manages to embroil her reader within the story and as such, the lives of the characters entwine with the life of the reader.  As if snatched from one’s own life, we are plunged into another world where joy and heartbreak is felt simultaneously alongside the characters.

Centred initially around the lives of twins Caroline and Daniel, The Treacle Well tells the story of children abandoned by their father and brought up by their aunt and uncle. Almost like an establishing shot in a film, the plot begins very narrow and rather slow, but it stems out and explores the lives of cousins Esther and Louise, and half-sister to the twins, Margaret who as a baby and like her half-siblings, is also later abandoned by her parents. Set in their childhood home and farmstead, Braeside, the large family lives idyllically until tragedy occurs and their once peaceful lives are shattered by the separation of one of their own. The novel follows the characters through their lives and a strong element of mystery evoking unanswered questions fuels the plot with Forsyth cleverly marking each chapter with twists and turns along the way.

It is Forsyth’s remarkable ability to narrate this book with such vivid description of character and setting that makes The Treacle Well such a worthwhile read. The childhood home – Braeside – is so well described by Forsyth and so well loved by the characters that it is near to impossible not to feel thrust in head-first by the rich description and not feel a part of this happy and idyllic setting, even when the pages take a darker turn:

“There’s daylight when she goes and stands out looking over the fields, that pure early morning light that comes in early November in the North of Scotland, the faint flush of the sun coming up on the horizon, the pearly blue of the night sky making its slow farewell, the stars gone, the moon a high transparent disc.”

But it is not only in its brilliant description where the strengths of this novel lie. Forsyth’s understanding of what triggers the human psyche and most importantly, what triggers her own characters’ choices is another characteristic that allows prompts her to provoke the strongest of emotions in this page-turner. Perhaps the most central and pathos-evoking quote of The Treacle Well can be pinpointed to one question asked:

“When the terrible thing happens and you are thrown into the outside world with no say in what will happen next, when you are so frightened you can hardly breathe – where do you turn? Who is there?”

The sheer irony of this clever quote is central to The Treacle Well’s plot – when the terrible happens, how should we react? If we take one road will it result in a wasted life filled with regret or are we actually protecting the thing that we love most?

The Treacle Well is certainly a worthwhile read that will not disappoint. The fourth of Moira Forsyth’s novels, it establishes her as a talented author who is well-seasoned in how to reach out to her readers and pull them in to a vivid and emotional whirlwind of meticulously penned descriptions that tie together to form a captivating plot.