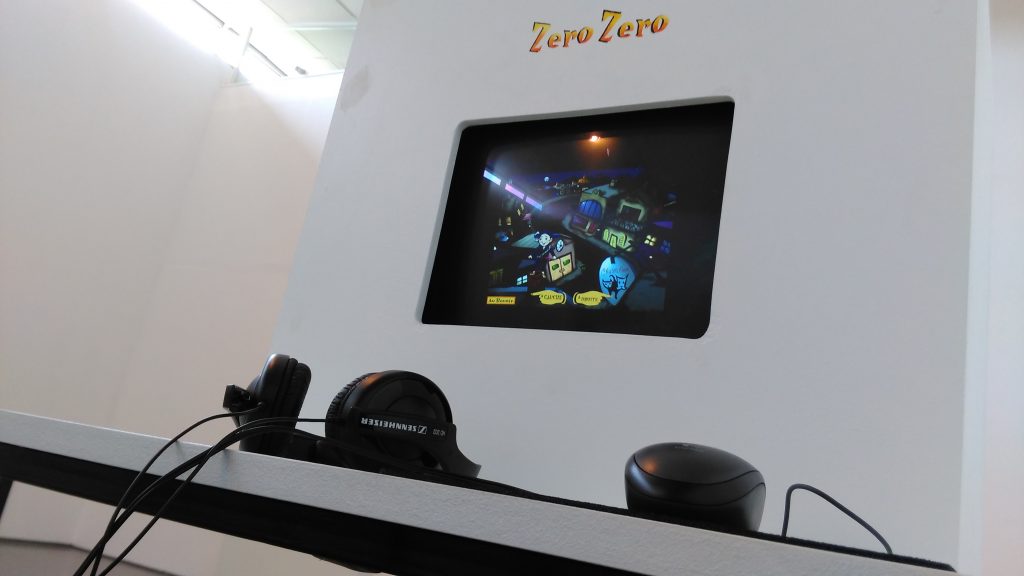 Duncan’s Zero Zero, available to play as part of the exhibition.

Divided between DCA’s two gallery spaces, CD-ROMS and Small Wars offer two distinctly different yet complementary viewpoints on the role of video games in contemporary culture. Co-curated with Dr. William Huber of Abertay University’s Centre for Excellence in Game Education, the exhibition participates in the championing of games not just as artefacts of popular culture, but also as artworks in their own right. Venturing into the first, CD-ROMS, the viewer is met with an open white space, sparsely populated with computer terminals, a single display case couched in the room’s centre. The eye is drawn to the far end of the room where an animated film, The History of Glamour, plays on a loop. On each of the four walls is a comic strip-like mural of illustrations, their vibrant colours and energetic lines pronounced against the white walls of the gallery. On closer inspection, these images are revealed to be stills from Theresa Duncan’s “point’n’click” adventure games which are available to be played at their respective terminals.

The three games, Chop Suey, Smarty, and Zero Zero, form a thematic trilogy, revolving around the exploration of a weird and wonderful adult world by young female protagonists. The games focus on the imaginative and inquisitive elements of childhood, presenting the player with a central map screen which must then be explored through the simple “point’n’click” of the cursor. As locations and characters are encountered, short story elements unfold and mini-games and amusing animations are uncovered. Though both the “point’n’click” genre and the CD-ROM can now be considered technological dinosaurs, Duncan’s games feel anything but dated. Their vivacity and the wealth of interactive treasures hidden within still draw the player into Duncan’s carnivalesque worlds and foster the mimicry of the child’s desire to explore and examine everything. 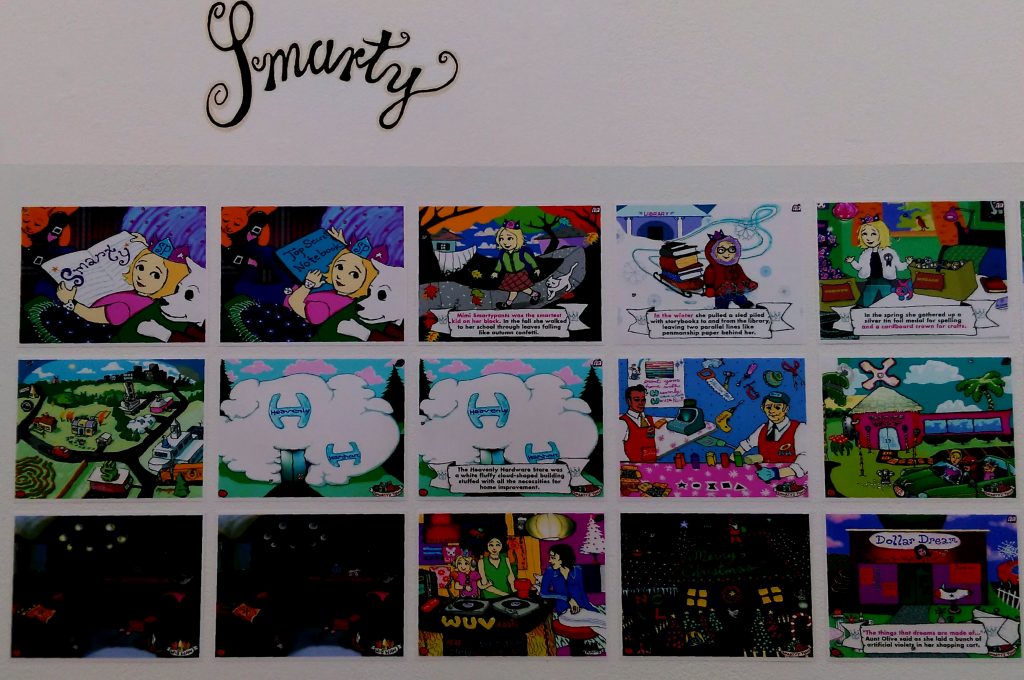 The wall mural of stills from Duncan’s Smarty.

In the solitary display case are examples of the original packaging for Duncan’s CD-ROMs, alongside interviews with the creator and her partner, Jeremy Blake, who created the visuals for Smarty, Zero Zero, and The History of Glamour. The latter, originally conceived as a fourth CD-ROM game, was later reimagined as a short film in response to the decline of CD-ROM market. A mature successor to the trio of video games, Glamour is an arresting semi-autobiographical piece which continues Duncan’s themes of self-expression and identity through her heroine’s exploration of, and turn from, glamour to grammar.

The second gallery, housing Eddo Stern’s Small Wars, stands in stark contrast to the white space of CD-ROMS. Stern’s exhibition sits in gloom, composed largely of interactive items displayed on projection screens. Directly opposite the exhibition’s entrance stands a wall-to-wall screen on which visitors can try their hand at the driving mechanics of Stern’s Vietnam Romance. Against another wall looms a gargantuan computer monitor on which can be played the prologue to Vietnam Romance, introducing some basics of the gameplay mechanics; namely, the acquisition and sale of relics of the Vietnam war. 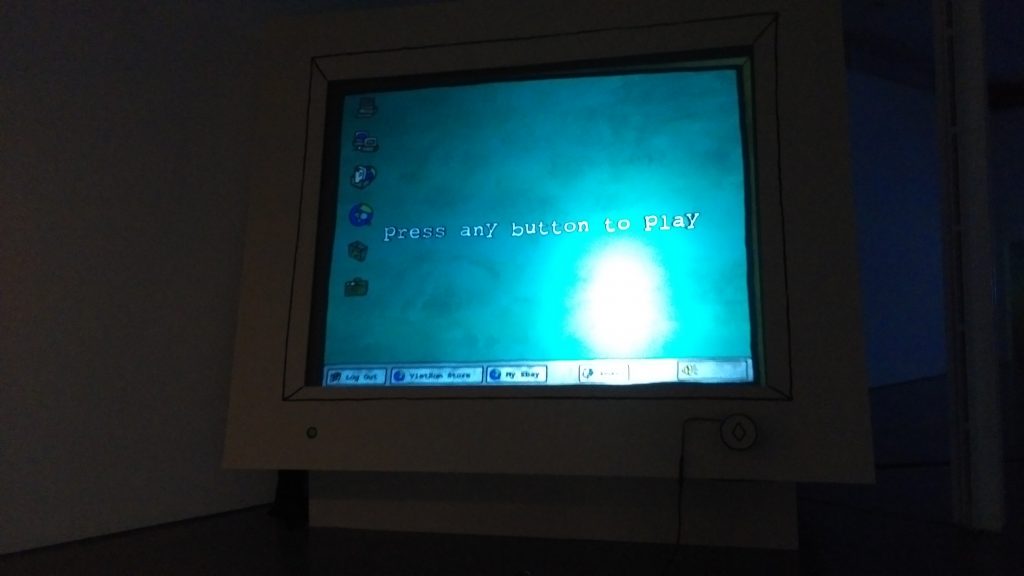 Alongside the giant monitor stands a coin toss game, 1000 Plateaus, an analogue game in which visitors must flip coins into holes on the currency-shaped platforms on the game’s surface. This installation proves an interesting counterpoint to the digital elements of the exhibition, raising questions of play and interactivity that link video games to social and developmental aspects of day-to-day life. Similarly, GoldStern, a digital pachinko-pinball game stationed against the opposite wall, features gameplay redolent of the aforementioned arcade machines combined with portraits from history and pop culture alike.

The final pieces of Stern’s exhibition, Best of Nam – a giant cassette tape which plays a version of A Hard Rain’s A-Gonna Fall – and Best Flamewar Ever, are located in opposite corners of the gallery. While there is relatively little to be said about the former, the latter piece, an animated enactment of an increasingly heated exchange on a gaming message board, makes clear the curious role of aggressive masculinity in the sphere of multiplayer video games as discussion of the game rapidly declines into an exchange of obscenities.

The works of Duncan and Stern are chalk and cheese, but both engage with the question of the role of video games in popular culture in distinct and interesting ways, revealing a capacity for creative storytelling and artistic expression that is only enhanced by their interactivity.