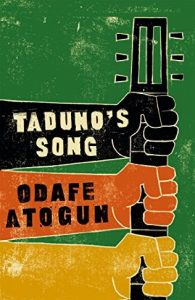 A new and powerfully intriguing novel has just hit the literary market in the publication of the Nigerian novel, Taduno’s Song. “A novel about love,” it says on the back cover, “about sacrifice, about courage.” I was lucky to get a hold of it before its publication date and it certainly does have quite a lot to say about these themes. There is something more to it, though, something enchanting that captures the reader outside the shell of those three universals – it is a novel that springs from a foreign fountain, based on unfamiliar identities and ethos.

The story revolves around Taduno, once a great and influential guitarist who used his music to undermine the government’s authority, but who was forced to find refuge abroad. After receiving a ‘farewell’ letter from his girlfriend (Lela), telling him about the desperate state of affairs in Lagos, he decides to return from exile. On his arrival, however, the plot takes an unexpected turn – no one remembers him. On top of that, he finds out that his dear Lela has been kidnapped by the government and held hostage because of her connection with Taduno. As the protagonist’s quest becomes clearer to him and his new companion (Aroli, the neighbour), the reader is gradually diving not only into the deeper strata of this fiction and its ideology, but is also simultaneously introduced to the history of the dictatorial Nigerian tyranny during the late 20th century, a regime which held thousands in captivity, one of whom was Nelson Mandela.

Taduno’s Song is Odafe Atogun’s debut novel. Born in Nigeria, he studied journalism at the Times Journalism Institute, Lagos which subsequently turned into the setting of the story itself. His journalistic skills are aptly accommodated on the pages, incessantly charging the highly realistic background of the book’s fictional world. I say realistic, because along with the story of the fictitious character (Taduno), one could faintly identify in him another, real-life character – Fela Kuti (1938 – 1997), a Nigerian music superstar, pioneer of the Afro-beat genre, but also a human rights activist and a political renegade who often clashed with the government, particularly during the tough times of 1970s and 1980s.

It is history that defines the rules of the novel. Taduno is faced with a choice: to praise the despotic government with his music, which is the only hope for Lela but leads to the destruction of everyone else, or to hide away, sing against it, be the voice and hope of the people, thus becoming a weapon against love. In the bigger context, however, it is the novel’s inner-imposed quest to attempt to alter history itself which, I believe, wins our admiration and acquiescence, which makes it worthy of being written and distinguishes it from all others.

We must not select those to save and those to condemn to death in the fight against tyranny. We must learn to say “no” to tyrants no matter how much they hurt us. That is the only way tyranny can be defeated.

Taduno’s Song contains more than a story. The undemanding narrative style, the syntactical simplicity and the lacklustre longueurs are all for the sake of the clear understanding of the novel. Full of sententiae, of wisdom, only those things which are deemed most important and essential by the author hold out. And here I find it somehow proper to turn to the back cover of the book and read it again, anew:

Taduno’s Song is a moving tale of sacrifice, love and courage.