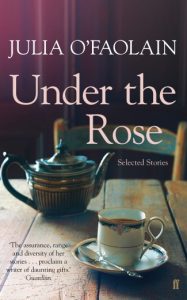 Under the Rose is a new collection of old short stories by Julia O’Faolain; the original publication dates range from her earliest collection in 1968 to a relatively recent collection in 2006. Plots, themes and structures vary greatly; some stories are taken from her childhood experiences, some from her adult relationships and some are entirely fictitious. If I were to identify an overarching theme of the collection, I would say that each story examines how relationships and interactions are informed by social, sexual and religious coding. Each story has an element of the taboo and is firmly focused on individual experience.

Having discovered that the author was Irish, and after a misinterpretation of the collection’s title (I saw ‘rose’ and thought English), I expected to read stories swollen with Irish nationalism. I was quickly and pleasantly disabused of my preconceptions in the first story entitled Daughters of Passion. It is true that it does feature the politics, violence, sex and faith indelibly bound-up in the Irish psyche, but it is much more about individual ardour, personal drive and self-discovery than any nationalist sentiment. O’Faolain’s short stories are vivid vignettes, written with a stark intimacy and an aura of revelation, discovery and release that lends them an almost confessional quality. A quality that reinforces the sense of secrets, lies and private machinations implied by the sub rosa title. Readers are plunged into scenes with little or no introduction, and find themselves privy to the exposed thoughts and experiences of the central character; this is particularly evident at the opening of “Oh My Monsters!”:

It’s freakish! Appalling! I can’t bear to think about it!

To whom or what? Oh, to whom but Kiki.

Language is particularly important in most of the stories, almost all feature letters, poetry, singing or multilingual characters. The dialogue is written with the unique cadence of each character’s native tongue; whether Irish, English, or French, their nationality is tonally and lyrically identifiable, which allows the readers cultural preconceptions to slide into place.

That one’s a godless aul’ rip! If the priest were to hear of it he’d ballyrag her off the altar.

Adie continued to knead soda bread … She could do without the esteem of the draggled village women, whose heads were addled by their squalling of their litters.

O’Faolain uses these linguistic differences to create a sense of displacement, isolation or alienation, especially in characters living in foreign countries or those returning home. Most of the stories are told in retrospect and have a stream of consciousness style that, although intense, manages to avoid awkwardness, even when dealing with uncomfortable subjects such as sexual violence and child sexuality. However, the vein of wry humour running through each story helps to temper scenes that would otherwise evoke strong, and perhaps difficult emotional responses from readers.

The diversity of themes in this collection is enormous and includes: estrangement, alienation, class, nationalism, women’s experience, faith, families, desire, violence, religion and repression. The latter is most acutely expressed in “The Knight”, a story that depicts the initiation evening of a man who has “bound himself by a remarkable number of controls” including abandoning his marital commitments in order to join a chaste group of “knights”. His internal pressure boils over after over-hearing another man seeking to pursue his wife, which culminates in a series of almost slapstick confrontations. The pressure of social and religious conformity, and the guilt and fear that accompanies it, are recurring themes.

In the final story, “Will You Please Go Now”, a protester meets a man at a rally and finds herself in a series of ever more complex interactions as she tries to find balance between her social conscience, her family relationships and her own sense of propriety. The story and its conflicted ending perfectly encapsulate the pressures of social expectations and personal comfort explored in the collection, and serves as a fitting final piece to examining the unresolvable tension between society and individualism.