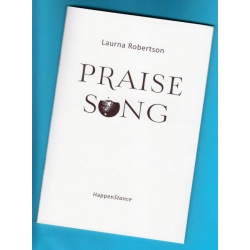 Laurna Robertson’s fourth publication, Praise Song, celebrates Shetland, the place of her birth and childhood, and reflects aspects of her early years there in poetic memoir.

The pamphlet opens with “North”, in which Robertson sets out the experience of leaving home and family to live in unfamiliar and unsettling surroundings, only to return:

your place set at the table, they shrink you
to the earlier maquette they knew
before you fled over the sea.

Robertson does not shrink from these discomfiting associations with her home and its paradoxes. The title poem, “Praise Song” is at one and the same time:

For islands caught in a time-warp of childhood.
For islands that taught how the world would be.

Avoiding sheer sentimentality, she remembers the rain and fog as well as the sunshine of childhood. In “Foula”, she recalls sailing through fog to that island, on a boat ferrying home the coffin of an elderly woman who had died in town:

When we landed, the Laird’s wife snatched our wrists
and drew us with her to the Hall
for women folk must not be part of the procession
carrying the coffin into the mist.

Foula, The edge of the world.

There are moments of dark humour too – in  “Photocall: Lerwick, 1898”  – sits Will, “whose will caused chaos, leaving goods to be shared/ by his surviving brothers’ sons,/or his brothers’ surviving sons.”

There is no doubt that we are in Shetland, with poems about Vikings, “Sea Wyf”, the Gunnister Man, whose preserved body was found in peat in 1952, and Up-Hellya. Although Robertson does not write in Shetlandic, she includes a few Shetlandic words and place-names now and then.   She also employs rhythm to satisfying effect – in “Inherited Rings”, “grandfather’s grandfather fought at Trafalgar”.

Many of the poems are observations on human behaviour.  “The Misses Angus” illustrates how model school teachers can leave their legacy down through the generations, even though they had no children of their own.  In “English Grandmother”, after her grandmother’s death,

we no longer modified accents
or censured gossip. We drove faster. Played cards
on Sundays. Forgot to pass jokers
to losing hands.

In “Peril Insurance”, Robertson accompanies her father on his last day with the Company; together, they visit old Alexander who sailed with a whaling ship as a boy and caught measles:

My father, who calculated risk to the end of his days,
asked: What were the odds, Alex, that you would
survive
a further eighty years?

In “Life Class”, her father teaches her to swim:

Years earlier, seeing a toddler tumble
from the harbour wall, he had leapt into the water
forgetting the day’s takings in his pocket
and that he could not swim at all.

At times, I was left wishing Robertson might push herself a little more, take a few more risks with language and approach.  But these are lovely poems on the whole, evocative of a certain time and place and interesting in their family stories and observations.