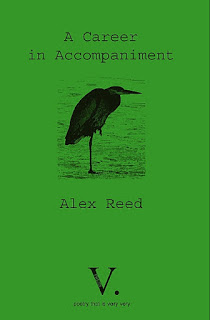 Northumbrian poet Alex Reed’s debut pamphlet is weighted by his former professional and academic capacities in family therapy, and more gravely by his personal experience of caring for his partner Jan who has multiple sclerosis. The severity of her condition offers them both “a future where there is no ‘escape without damage.’” Openly autobiographical, A Career in Accompaniment deals with the deterioration inherent in her condition and the damage inflicted on both sufferer and carer in the harrowing last stages, never flinching in its pained and painful observation.

Perhaps it is worth examining some wider thoughts about poetry rising from tragic circumstance. Poets have always had an essential role in keening the nigh unspeakable – some of history’s finest poetry does exactly that. Alas, there is also a glut of heartfelt verse which is frankly poor, published too eagerly by certain places, perhaps in misguided sympathy. However, journals of the calibre of The Butcher’s Dog, and web presences like Ink, Sweat and Tears and The Lumen (where a number of these poems have appeared) never offer mere damp shoulders. V Press demonstrates that same integrity.  This review seeks to examine these poems critically rather than undermine them with (in this context) misplaced kindness. Thankfully, that has not proved problematic.  Alex Reed can write.

Opening with the prose poem “Things illness stole”, we find Jan, prior to diagnosis, at the cusp of their relationship; rather as Les Murray’s poem “It Allows a Portrait in Line-Scan At Fifteen”, does the much-needed job of untangling his son from his autism, this offers a vibrant ten line picture of a woman, completely charged and changed by the title’s significance. The magnitude of their loss is caught in the final, soon-to-be-ironic words – “Everything’s going to be alright”  –  happily lipsticked on her mirror. Ominously, these words hang over a deliberately disproportionate whitespace.

Over the page, “Fall” parallels the first physical and psychological manifestations, “for all the falling to come”. Poetry does this so well, perhaps particularly short poetry … the terse, the necessarily packed, every word earning its place three times over. There’s no room for the loose paragraph, or redundant sentence, which also carries a truth about the poet’s situation. What Neil Astley has elsewhere termed “real poems for unreal times” underlines the necessary quality here. Doubtless Reed’s situation would not afford him the luxury of writing an expansive novel, should he have so wished; arguably, poetry is the required medium in extremis.

If only we might
rise, pull on our coats, walk out
to the bustle and bite of Newcastle.

Consider “Woken by your cough”, as he finishes with

It dawns – flame licking dry wood –
I live in a state of rage[.]

In that deft, layered couplet he demolishes society’s conveniently dangerous myth of the sainted carer, content, without need of his own. Would a novel have required a chapter to take the reader there? Just as the poet’s brief gift of too-short time has loaded and condensed his lines on departure, the reader’s reception is correspondingly focused.

The list poem “Case notes” offers associations of what MS has come to mean for both partners, while throughout the collection, italicised voices of direct speech are used sparingly, with a searingly direct hit “May I use your phone?”, “Just keep going. I try”, “Is she conscious? /I say Sort of”, as the ordinary phrases bow with the hellish… Elsewhere, such as in “Her half-life”, a gentle evocation of nature in seventeen words is entirely subverted by mention of his partner in the last four.

In his final poem, he hymns…

Remove yourself.
Take these things –
pencil, prayer-wheel and blade
to fashion an opening.

In A Career in Accompaniment, Alex Reed has done all that, with dignity, courage and respect to his partner, their situation and to poetry.

Postscript: During the writing of this review, I learned that Alex’s Reed’s beloved partner Jan had died in July. This review goes out with my heartfelt condolences. I line those condolences with the truth that his tragedy has not softened or changed my reading of his work. This collection is a testament to an extraordinary relationship, but it also stands as beautiful poetry, with or without the autobiographical notes.