Duncan of Jordanstone’s MSc Animation & VFX course has a reputation for producing artists of exceptional skill and talent, and, after a team of graduates scored themselves a BAFTA last year, expectations for the course’s output are high.

Occupying the Animation corridor in the art college’s Crawford Building, the MSc Animation and VFX display is arranged in such a way that visitors are funnelled through creative processes before arriving at finished works; glossy posters promoting the individual films are hung side by side with concept artwork, character models, and stills of their skeletal rigs. Entering the corridor from either end, viewers are tantalised by what’s behind the films on display before heading for the darkness of the cinema.

First on the screening’s reel was Toy Scandal, a combined effort from Andrea McSwan, Saikrishna Srinavasan, Elena Lam, Efstathios Psomadellis, Aimi Nabila Anizaim, Norhasheila Muharam, Katherine Melville, Nelysa Roslan, and Zhuoran Li. A class project made in collaboration with Glasgow’s Axis Animation, Toy Scandal is a two-and-a-half minute animation of an audio segment taken from an episode of Jeremy Kyle. Taking its cue from Toy Story, the film casts a number of children’s toys as Kyle and his guests, thus amplifying the ridiculous nature of the talkshow and its domestic dramas.  The short’s cast of troll dolls, Lego, and He-Man figures are admirably modelled and fluidly animated, and the animators show a flair for comedic timing in their editing of the piece. 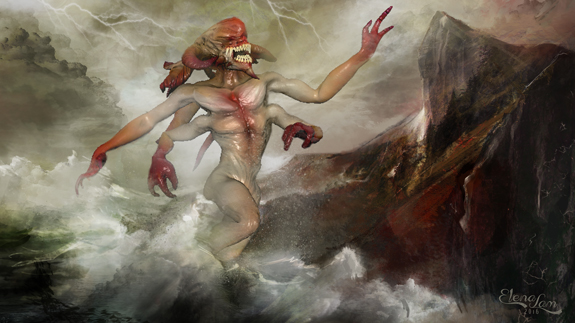 Next to be shown was Elena Lam’s Ragnarok, featuring a combination of a 3D modelled character and a matt-painted background; like flattened theatre scenery, what appears initially as a three dimensional landscape slides aside as the 3D monster clambers forth. Less an exercise in story-telling than an exhibition of technical skill, Ragnarok is a visually arresting piece that displays Lam’s command of texture and movement in both two and three dimensions. This taster, along with her concept work for future projects, will leave viewers eager to see more from Lam.

Katherine Melville’s Home is a 3D science fiction short about a homesick astronaut.  Opting for a more cartoonish and less textured style than Lam, Melville focusses on exploiting her extra-terrestial setting in order to play with the effects of lighting and gravity upon her character and its environment. By contrast, Nelsya Roslan’s 2-D Droplet, in which we see the aquatic acrobatics enjoyed by a single droplet of tea as it is poured from the pot, seems all the more vibrant in its floral detail. Droplet is charming with a looser and, appropriately, more fluid aesthetic to its digitally hand-drawn visuals; its free-and-easy style of movement conveys a sense of serenity in the simple act of pouring tea. 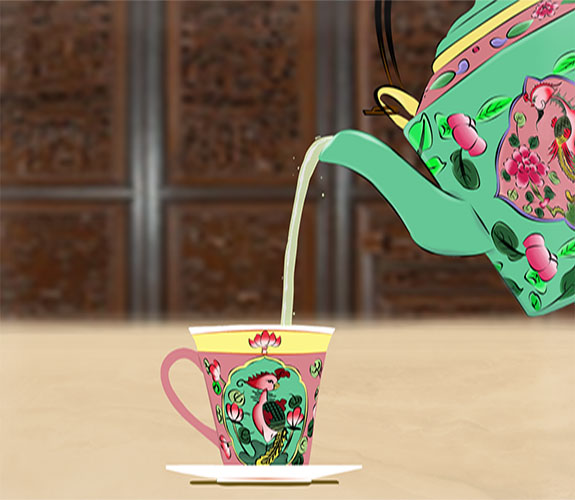 Taking its cue from previous graduate Kieran Duncan’s Mitigating Circumstances, Saikrishna Srnivasan’s The Cupid Raccoon is a live action piece focussing on the implementation of digital VFX. A comedic film in which the animated raccoon escapes the character’s computer and helps his creator to overcome shyness, Raccoon exhibits Srnivasan’s ability to both model 3D characters and animate them in such a way as to suggest genuine interaction with a real environment.

Forgotten in Time, by Norhasheila Muraham, is, at first glance, a deceptively pleasant piece about a young girl and her unicorn toy. Animating in 3D, Muraham opts for a cell-shaded aesthetic, focussing on the details of her two main characters. What is most striking about this film, however, is not its visuals, but its theme; the film is a metaphor for Dundee’s homeless population with which they form a striking juxtaposition. In a similarly humanist vein, Efstathios Psomadellis’s Hero concerns itself with the deterioration of the relationship between two boys pitted against one another by war. With a semi-realistic style that treads the disturbing slopes of the uncanny valley, accompanied by a host of distorted sounds, Hero is a decidedly dark experience. 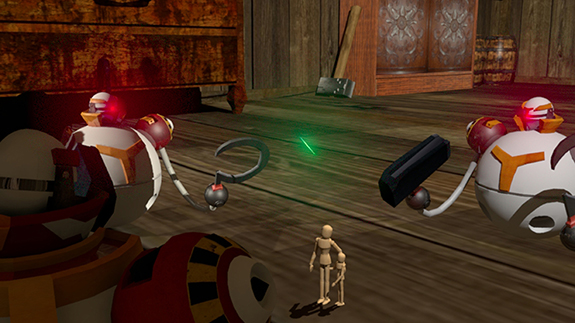 Bridging the gap between the cynicism of Psomadellis’ film and Aimi Nabila Anizam’s light hearted animation of a Malay folktale is Zhuoran Li’s Jade. Recalling Shane Acker’s 9, Jade features the liberation of some wooden dolls from the tyranny of their robot overlords through the intervention of a jade dragon, a Chinese symbol of rejuvenation. Though contrasting visually with the cartoonish storybook aesthetic of Anizam’s The Naïve Si Pandir, Li’s film shows a similar preoccupation with folklore and the relationship between man and nature.

The visual styles and narrative concerns on display are as various as they are distinct, yet every work shows an admirable attention to technical expertise and individual expression.