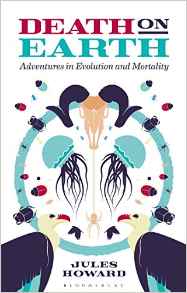 Death is an important subject in biology.  After all, Charles Darwin and Alfred Russell Wallace independently arrived at the concept of natural selection by contemplating death.  After reading Thomas Malthus’s notorious Essay on Population, they realised that, unchecked by death, the ability of living things to reproduce would quickly result in astronomical numbers of every living thing, far in excess of the resources available for them to live on.  From this, it follows that there must be a “struggle for existence”.  Thus any heritable advantage that one organism has over its fellows, however small,  will tend to increase in frequency in the population, thereby producing change in the direction of better adaptation.  This process is what Darwin called Natural Selection.

But death is no direct result of competition, predation and famine.  All organisms, even if well fed and free from harm, will die of old age; it seems that cells get poorer at repair and maintenance as time passes.  This gives rise to questions as to whether ageing and death are positively selected or simply by-products of the fact that Natural Selection is essentially differential reproductive success.  Given this, why should we expect the selection of traits which could benefit an organism after the age of reproduction has passed?  Current thinking favours the second explanation.

A third aspect of death is mechanism. What specifically causes the gradual breakdown of the maintenance machinery and can these causes be tackled by us to increase human longevity?

Death on Earth isn’t overly concerned either with death as the motor of Natural Selection or with ultimate explanations of why death exists at all.  However, Howard does discuss the mechanisms of death. Does an ability to deal with free radicals confer greater longevity, for instance?  At present, it seems the answer is only “maybe”; existing evidence is contradictory.  He also tells us about caspases – enzymes which organise cell suicide.  Cell suicide is essential for the existence of multicellular organisms, which rely on continually culling essentially selfish cells in order to keep the larger structured organisms running.  Perhaps there is a selective explanation for death after all.

While there is much of interest in the book, it lacks an overarching structure and one of its general claims is highly questionable.  Howard tells us that life “emerges because it fulfils a natural universal tendency toward an overall increase in entropy, essentially”.  Life is certainly compatible, as it must be, with the Second Law of thermodynamics which states that entropy – broadly meaning “disorder” – tends to increase.  The temporary order of life is bought at the expense of increased disorder in the surrounding environment but it is barely intelligible to claim that life is a consequence of the Second Law; it certainly must be argued for and not just stated.  Isaac Newton is also credited with the Second Law, which emerged more than 100 years after his death.

Popular science writers often seek to introduce “human interest” to leaven the scientific bread, but Howard’s technique of introducing many of his chapters with his encounters with his scientist informants, complete with dialogue, soon grates due to excessive repetition.  An editor would also have been profitably employed in culling some of the unfortunate figures of speech, such as “trees are like NATO”, flies “sow their genetic oats on the fertile soil of death” and “numbers of vultures have plummeted. Literally and figuratively plummeted”.