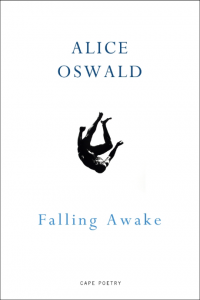 After reading this collection by Alice Oswald, it came as no surprise to learn that following her studies of Classics at Oxford, Oswald trained as a gardener. Plants, flowers, myths and legends are constant threads that run through her poems. She draws much of her inspiration from the River Dart and the folklore of the surrounding Devon countryside. This neatly-bound volume titled Falling Awake features a myriad of voices from nature. In the foreword of her TS Eliot prize-winning poem “Dart” (not included here), Oswald writes: “All voices should be read as the river’s mutterings”; through her words, Oswald does personify the flora and fauna that she encounters. In poems such as “Swan” and “Fox”, Oswald lends character to the birds and animals that inhabit the countryside. In “Flies”, even the insects have a voice:

This is the day the flies fall awake mid-sentence

and lie stunned on the window-sill shaking with speeches
only it isn’t speech it is trembling sections of puzzlement
which break off suddenly as if the questioner had been shot[.]

Much of Oswald’s work is characterised by voices, including clever use of dialect. In her keenly observed “Village”, Oswald repeats phrases such as “without one word of a lie”, “you can say what you like” and “are you listening” over 20 stanzas, skilfully conveying the voice of a gossipy villager:

listen somebody’s sister the very soul of respectability
without one word of a lie just this very morning
being in her slippers having recently put out the trash
had the misfortune to die in the snow [.]

Oswald also draws on a multitude of characters from myth and legend. The magnificent and moving twenty page “Tithonus”, based on the Greek myth of Tithonus, the lover of Eos, the goddess of the dawn, is given a section all its own. The story goes that Eos asked Zeus to make Tithonus immortal, but she forgot to ask also for eternal youth. The consequence was that he simply aged, unable to die. Oswald takes us on an epic journey as Tithonus waits for his lover the dawn to appear, as he does every day. Two of the twenty pages are almost completely blank except for the word “etc”, and the last four stanzas are printed in gradually fainter text to represent Tithonus fading away as the dawn breaks. The poem opens with a synopsis of the myth, and continues in the form of a timeline, outlining the 46 minutes before Tithonus meets the dawn at midsummer:

Like all great poetry, these poems are best read aloud. They reflect beautifully the organic shapes and sounds of nature, and the fluidity of language. They propel us along like the flowing river, intermittently fragmenting and repeating in a soothing, rhythmic cycle. The omission of punctuation marks and capital letters in Oswald’s poems means they flow as freely as the river that inspires her.

When you pick up the book it feels silky smooth, just like Oswald’s words as they roll off the tongue. The simplicity of the cover design – a pure white background with plain blue text – adds to the effect. It’s like dipping your hand into a cool river and feeling the water run between your fingers.

These poems grow on you. Without one word of a lie.