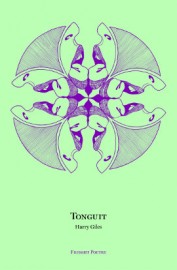 Harry Giles, brought up tri-lingually with Orcadian, Scots and “English”, sets out his stall in “Brave”, the opening poem of his first full collection, Tonguit, which was short-listed for the Edwin Morgan Poetry Award in 2015:

Acause incomer will aywis be a clarty wird,
acause this tongue A gabber wi will nivver be the real
Mackay, A sing.
Acause fer aw that we’re aw Jock Tamson’s etcetera, are we
tho? Eh? Are we.

Giles identifies as an outsider in many ways – linguistically, politically, by sexual orientation – and gives us much to think about, challenging traditional leftist ideologies as much as the right. The problem of language – the political and social assumptions about class, culture, clan and not “speaking right” which are made as soon as we open our mouths – surfaces frequently.  As he states in “Visa Wedding”:

“Poem in which nouns, verbs and adjectives have been replaced by entries from the Wikipedia page List of Fantasy Worlds” recalls Edwin Morgan’s interest in the sound, structure and look of language:

eidolon to pern me, tamriel! Harn me till
all my mundus aurbis one glorantha Eä!

Language is stripped back to sounds – from the magic of crickets and cicadas to the onomatopoeia in “Nicht Shift at the Slipper Baths”:

What I particularly like about this collection is its variety. In lots of ways it’s traditional, with its nods to Burns, MacDiarmid, and Morgan. There’s a pantoum, concrete poems for “Piazza dei Miracoli”, leaning at the jaunty angle of its tower of Pisa, and for “Alpe d’Huez” of Tour de France fame, and a typically Giles take on a very familiar habbie, “Tae a Cooncillor on his clossin anither sweemin puil wi his cuts”, which opens:

Yet, in its explorations of themes of sex, gender, identity, consumerism and power, Tonguit is entirely current. “Your Strengths” is a fabulous mash-up homage to DWP questions for claiming disability entitlements, citizenship applications, and other surreal “tests”, highlighting the absurdity, cruelty and humiliation which typify such forms:

These are political poems alright, but they are often playful and fun and there’s a richness and variety to them.

At times, Giles can be a little too cerebral and knowingly clever for my taste, foregrounding ideas or techniques in ways that are interesting but which sometimes shout above the poetry.  But for all that, maybe in part, at least, because of that, it’s poetry which is fresh, energetic and witty.  So it’s really good to see Tonguit, Harry Giles and Freight Books duly recognised on the shortlist for the 2016 Felix Dennis Prize for Best First Collection.