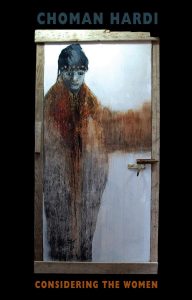 This is the second poetry collection by Kurdish poet, Choman Hardi. Born in Sulaimani, Iraq, Hardi moved to the UK with her family as asylum seekers after the genocide of Iraqi Kurds in 1988 when 100,000 civilians were killed. She is the daughter of celebrated Kurdish poet, Ahmed Hardi.

Hardi studied at Oxford, London and Kent, where she was awarded a PhD in the study of the mental health of survivors of that genocide. The collection’s cover shows the figure of a woman, painted on a rough door. The sombre tones and the colours running and bleeding into each other suggest wounds and decay; the figure of the woman is beautiful, but her expression is pained. The rough door suggests escape, terror, transition, thus mirroring the experience of asylum seekers.

Considering the Women is divided into three sections, the first being concerned with the experience of refugees who have left their homeland and their ambivalent relationship with the old and new countries. These poems are engaged with the problem of preserving memories of childhood and the difficulty in establishing an identity that embodies  both past and present.  In, “Homeland, What Shall I do With You?”, Hardi grieves for a painful episode, where two sisters had been found, murdered:

Homeland! You are still
Drenched in blood in my dreams.
Tell me how can I fix you?
Which crime shall I tackle?
Which wound shall I bandage?
You tell me, where shall I start?
What shall I do to make you change?

The central part of this collection, titled “Anfal”, is a group of poems documenting the experience of the Kurdish refugees. Hardi’s poetic style has been modified to reflect the trauma suffered. She writes that her Kurdish poetry was written in a lyrical style but, in order to address the painful subject of genocide, writing English allowed a new stark, direct voice to emerge.

These poems depict the extreme violence carried out on the rural Kurdish populations in Iraq, almost as if Hardi was taking up Theodor Adorno’s famous challenge   about whetherit would be possible to write poetry after the Holocaust. The poems often appear at first glance to be deliberately un-poetic, but out of the documented horror comes a truth and an authentic voice of protest against the violence described.

In the section’s opening poem, “Researcher’s Speech”, the poet addresses the survivors and states her intentions. This is appropriate, showing consideration for the suffering of an entire ethnic group and documenting it sensitively, in order to bear witness on their behalf, She writes:

…I promise to listen
With all that I have, stay true to your story,
Not distort or edit your grief.

The following lines are from “The No-survivor Village”, surely the saddest title for a poem one might read:

Who can believe that they all died –
Men, women, old and young?
Who can recount their apprehension,
Their doomed efforts to escape?
The last lines are deeply poignant and sharply observed:
…The wide-eyed children
In the back of trucks, waving
At civilians, unaware of their fate?

The poems in the collection’s final section seem to progress toward resolution for the poet. In “My English Years”, she writes with surprise at her decision to return home to face the past:

…I didn’t think a day would come
When homeland would wake up in my heart
And like a beast in a childhood dream
It would summon me to its ruins
And enchant me. I couldn’t imagine
That I would leave you and not turn back.