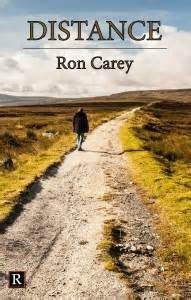 The emotions, imagination and images which characterise Ron Carey’s first collection, Distance – a work brimful of metaphor and personification, deeply rooted in his Irish background – owe as much to Dylan Thomas as to Heaney, Kavanagh and Yeats. All have their place in this long poetic journey back into distant memories, long-forgotten dreams, relationships and desires and, ultimately, into far-flung lands. Without seeking to be modern or edgy in form or content, Distance, divided into four sections, nevertheless contains surprises and delights to take the reader far beyond the borders of Eire and out into the world.

From “Moving”, the first poem in the section entitled “Time Travel” to the later poems in “The World Will Break Your Heart”, intimacy and precise observation of the detail of Irish life create together a powerful sense of place and of character. From the child,

at once excited and fearful about the horse-and-cart removal out of the city to the “thousand boxes of the new estate”, to the final poem in the book, “Burying Angels”, the whole gamut of human rites of passage is condensed into this direct and unsentimental poetry. We read of a boyhood visit to the seaside with broken-hearted aunt Lilly, memories of dead parents and the never-met grandfather, the traditional childhood fears of wild animals who lie in wait for him under the bed ( “The Leopard in the Coal-shed”). Elsewhere, Aunt Babbie wrings the necks of their chickens for the table

In the Irish poems the warm and rounded character who is Carey himself comes to life. The confident handling of the memory of his mother’s last illness in the poem “Upstairs” is beautiful in the delicacy of its imagery; his mother, dying and delirious, wants to “lay down her pain for a while”, so he takes her “Upstairs … To the age before one is old.” Indeed, to an age where she and her husband, Danny, shared the bed where they made love in their youth. In her mind her son has become her long-dead lover.

Images of his parents run like a thread of gold throughout. In “The Fields” the poet evokes the fear and anxiety of the child whose dog is loose amongst the cattle; he runs to his mother,

placing myself in her hands like an unexploded bomb[.]

He sees her searching in “the red mouth of her purse” for a Christmas tip for the postman in “The Letter”. Carey remembers with his child’s eyes in “Christmas Story” the disintegration of the Santa Claus father, who becomes “some strange man”, shouting that “Christ is laying off brickies”; then he portrays the Irish labourer showing a would-be employer his calloused hands in “My Father Built England”:

In 1939, England needed
A solid Paddy, full of gristle, to be counted on.

In the “New Oceans” section there is mystery surrounding the Amelia and Isabella poems, set in Belize, on the Mexican border. Are they works of the imagination or are they based on Carey’s own experiences? Even if Carey isn’t telling, the characters, the language (“Amelia’s opstayz house”), the culture, the casual schoolboy killing of the Howler monkey all seem real and yet distant. Either way, they are as full of sensuousness as any of his other poems: the succulence evoked in “Pigs’ Toes”, in the “Time Travel” section, echoes down the line in “Amelia’s Wedding”, the altar “wild with craboo, its yellow fruit jam-ripe”; a tropical climate conjured

I loved these poems. They drew me into Carey’s imagination and the richness of the life they portray. I look forward to his next collection.