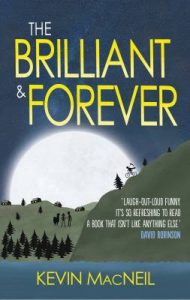 On a small Outer Herbridean island, the tiny community is obsessed with literature and plagued by social divisions. Everyone writes, the traditional greeting is “what are you working on?”, and once a year they host the Brilliant and Forever literary festival. The Brilliant & Forever is an unabashedly weird novel about literature, community and integrity. It follows an aspiring author and his two best friends as they all prepare to compete for fame and fortune in the judge’s decision, and risk it all in the people’s decision, at the “World’s Most Infamous Literary Festival”.

Several aspects of the novel place it firmly in the satiric mode; an ironic main character, meta-fictional stories within stories (and once or twice) within stories, abundant (and maybe a little overdone) intertextual references, and there is more than a touch of the absurd about a literature- obsessed Scottish island whose inhabitants include talking alpacas. The trouble is, the satire feels muddled, and generally directionless beyond a mild expression of existential angst. Life is hard-ish, people are kind of awful, these are hardly new sentiments and I’m not convinced that The Brilliant & Forever succeeds in presenting them in a new and meaningful way.

The Brilliant & Forever is told from the perspective of an unnamed narrator; a dishwasher who struggles with the banality of small island life, the desire to be worthwhile, and the battle between his internal contradictions, who is also, by far, the least interesting character in the novel. The narrator’s best friends are Macy; a tradition-defying fisherman-woman and author, and Archie; a spittoon bearing, stetson wearing, talking alpaca (who also happens to be the world’s premier alpaca author). Macy and Archie are compelling characters with complex motivations and endearing idiosyncrasies. However, due to the limitations of the first person narration, we only get a few scenes with Macy and Archie and their development is, unfortunately, diminished by the egocentric lens.

Stylistically the novel wears its literary heart on its sleeve – not only is there a reference to some Great Work of Literature or a Brilliant Author every 86.7 words (hyperbole), McNeil also gleefully plays with cross-genre techniques incorporating elements of poetry such as haiku, drama, and unusual punctuation:

(But I will split the money (if I win (which I won’t (unless I get very lucky indeed (I realise I’m conceding I do have an actual, real-life chance of winning (the thought excites and terrifies me (I need some kind of a hug (any kind at all))))))).)

The rich figurative language is sometimes a little at odds with the casual dialogue, but McNeil manages to avoid being obnoxious and it is certainly in keeping with the peculiar little island. The figurative language also lends itself to creating an air of anticipation about the novel which is so potent that even the narrator’s 30 miles or so of uneventful cycling is imbued with an intensity it really doesn’t deserve. McNeil makes a major switch in style once the day of the Brilliant and Forever Festival arrives as the linear narrative essentially becomes a short story collection interspersed with short commentary from the narrator. I was disappointed with this section as a whole, the complete recitation of every performance stalled the plot considerably, and the flash in the pan conclusion made everything that came before it seem perfunctory.

On the whole, I didn’t love this novel, which is disappointing because I wanted to love the characters, to laugh when they laughed, to ache when they ached.  It should have been easy, they are brimming with the potential to be quirky and interesting, but I feel like their potential was sacrificed in favour of a showing off short stories. The Brilliant & Forever is a charming, funny, sad and hugely bizarre novel that ultimately left me wondering, what was the point?