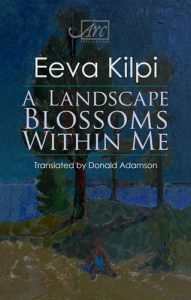 Eeva Kilpi has herself remarked that her works have three main themes: the evacuation from Karelia where she was born, relationships and nature. These themes are prominent in A Landscape Blossoms Within Me, which consists of 70 poems chronologically arranged and meticulously translated from Finnish into English by Donald Adamson. Originally published between 1972 and 2000 these poems are full of Kilpi’s signature irony and self-mockery, a true sample of a beloved poet at her best.

The translated poems are placed next to their original counterparts throughout the collection, which allows the reader to compare to two with ease, whether simply in form and appearance or also, as in my case, linguistically. Adamson’s translations are remarkably accurate throughout the collection showing both the cooperation between him and the poet and his own extensive skills. There are however, some cases where the poems lose a specific feeling or intensity when translated. An example of this is the very first line in the collection, which reads “Sano heti jos mina häiritsen,” a line that has been translated as “Just say if I’m disturbing you.” The general sentiment is there and yet the Finnish line delivers a sense of urgency and literally translated would mean “Say immediately if I’m bothering you”. However it is important to note that Donaldson uses his skill to not only translate Kilpi’s work word for word but to make the translated poems work as poems in their own right.

Aging and death feature prominently in the collection, both demanding the reader’s attention in very different ways. Whilst the poems on aging are mostly light-hearted and focus intently on the love that still blossoms in old age, the poems on death, which draw heavily on the death of Kilpi’s father, are filled with anguish and sorrow:

A month from his death.
He’s never been as here as he is now.

These broken-hearted poems are in direct contrast to the otherwise ironic and clever poetry of the rest of the collection, and they provide it with a certain depth without which it may not ring as true.

There is also a religious aspect to the poetry. A new take on a classic psalm and several references to God indicate this clearly.

Truly, I’m so wretched, he thought
and he had to go and lie down.

These lines are the ending to a poem which describes the Biblical Creation of Man. Kilpi creates in this short poem a very humane God, who in turn creates a flawed creation – man – and to punish himself He names them his own image. This sort of irony and ability to examine religion from a new perspective are what makes this poetry collection unique. Kilpi’s work yields thus on may different levels, allowing a reader from any walk of life an opportunity to grasp the truth that they may seek in these brilliantly executed words both in the original Finnish and the translation.

The way the collection is split into sections, each purportedly quite self-contained thematically, is refreshing and makes the poetry easier to approach. However, the central themes do not fully respect these boundaries set by the division and rather intertwine throughout the collection. This creates an organic entity where each poem serves a purpose. A Landscape Blossoms Within Me is an enjoyable collection for anyone – whether bilingual or not. Even without the understanding of Finnish it is possible to appreciate the appearance of the poems and the way in which they correspond with their English counterparts.