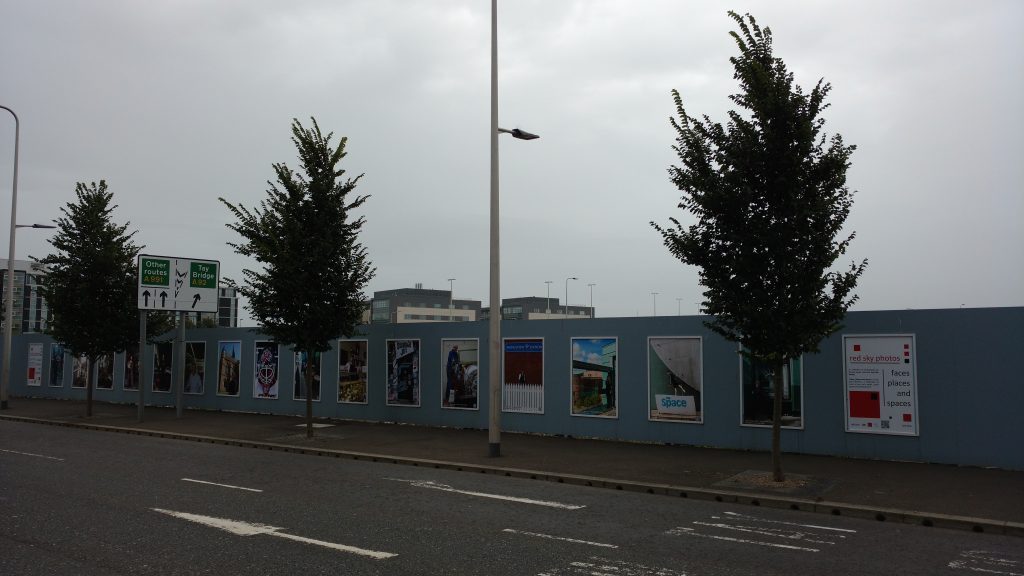 Driving or walking along Shore Terrace on the edge of Slessor Gardens, most recently populated by Oor Wullies’ Last Gathering, which Dundee took so much to its heart, you will be struck by a series of 16 photographic poster-boards. Just as the plaques on the other side of the gardens celebrate past heroes and heroines of the city, each poster-board displays a large-scale photograph of one of the contemporary gems that are the faces and places of our beautiful and  special city.  All the faces and places portrayed highlight the warmth and variety of these artists, public spaces and entrepreneurs, inviting us to explore the city further.

This exciting exhibition is the first by Red Sky Photos – a newly formed photographers’ collective – all of whom are long term members of the Blue Sky Photo Club and have been inspired by the Scottish photographer, Ross Fraser McLean .   Many of the group have exhibited in previous Blue Sky Photo Club exhibitions, most recently in the Cowgate underpass, in the summer with Love is a Dart where each photographer displayed a largescale photograph, also on a poster-board, each from a different part of Dundee.  This celebrated the city in its many guises and, importantly, brought some wonderful images to a wide range of people in a non-traditional gallery.  In the same way, many of Dundee’s diverse facets are brought to the attention of the huge range of people passing through this public thoroughfare in this unusual, striking and innovative exhibition.

A number of Dundee’s special public venues are highlighted through their people  in clever and unique ways: Peter Gregor’s engaging and skilfully composed depiction of Clare Brennan of the Hannah McClure Centre; Jenni Whyte warmly captures Sanna Dyker of the McManus Gallery; Irene Birse presents Adrian Foot of the Museum of Transport; Winsome Hardie’s neat link to outer space with Stuart by the telescope at Mills Observatory; and Nikki Lothian renders a tender portrayal of the bonding of Hannah with Ben the hyacinth macaw  at Camperdown Zoo. 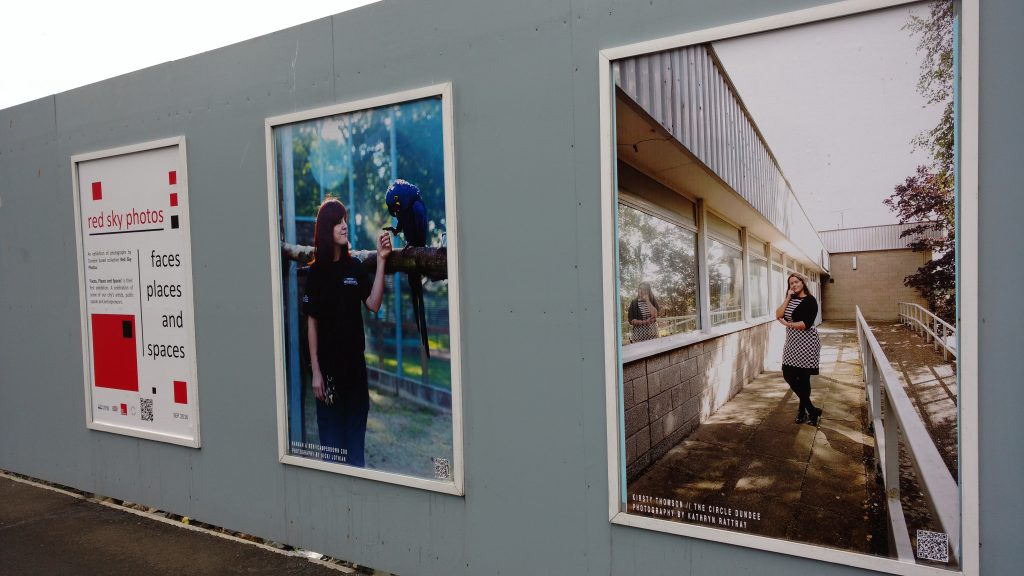 Some of the city’s artists draw us in to their particular venues: Shaun Stickland’s dancing is beautifully captured by Irene Birse at the Space, while the bold designs of Syke Graffiti Artist are featured at Swankie Jo’s by Caron Sandeman.  Exemplars of the culinary delights of the city are highlighted with Allan Braithwaite of Braithwaites’ coffee shop by Dave McRae, and Stephen and Hilary Barney of the Cheesery by Caroline Tosin; both photographs evoke the wonderfully conjured aromas of coffee beans and cheese respectively.  Marie Riley’s picture of Stuart Smith of The Wine Press, just across the road from the photographs, neatly emphasises its al fresco opportunities, while Peter Gregor’s skilful angles and strong colour blocks cleverly highlight Barry Elder and Bridgeview Café.

Where Dundee’s sporting venues are captured by Bill Duncan’s striking headshot of one of the Dundee Stars ice hockey team members at Dundee Ice Arena and Jarek Szaranek’s welcoming photograph of Colin Warden of the Olympia, two of Dundee’s smaller businesses are strikingly portrayed by the colourful Daisy Duncan of The Lion, The Witch and the Wardrobe by Caron Sandeman and Ellen Piggott’s stylish portrait of Irving Miskell-Reid of Freedom Hairdressing. Lastly, Kathryn Rattray gives a touchingly reflective portrait of charitable consultant, Kirsty Thomson of the Circle.

The exhibition opened appropriately on the same weekend as Dundee Open Doors Days and enhanced the experience for people visiting the various buildings by opening up some of the other venues, and the faces depicted invite you in through these pictures. The large scale photographs are captivating and unusual, bringing together many of the unsung heroes and heroines of this special city.  The exhibition will be on view for the next couple of weeks, so do take a look. I look forward to seeing much more from this collective.