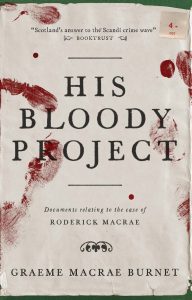 His Bloody Project, is not only the title of this novel, (a work of fiction constructed to give the appearance of a factual account), it is also the title of a sensationalist chapbook referred to later in the novel, based on the memoir of our unreliable narrator and self-confessed assassin, Roddy Macrae,   Both of these accounts  recall the events of a triple murder of 10th August 1869 in the village of Culduie (a real place) in Wester Ross.  In the clever way he presents the whole, and parts thereof as a Matryoshka Doll sequence of fiction masquerading as historical fact, Graeme Macrae Burnet demonstrates a fine sense of humour!  With this novel, he has also made it all the way to the Booker Shortlist, and deservedly so.  His debut novel, The disappearance of Adele Bedeau, won him a New Writer’s Award from the Scottish Book Trust; the psychological thriller genre is clearly where his considerable talents as a writer are exploited most fully.

In his efforts to give His Bloody Project the appearance of a factual account, Burnet goes so far as to write a preface, detailing the research he did in order to put this “memoir” and surrounding witness statements and accounts together.  Of course, a little online research reveals that the novel, with the exception of the general historical context, and the character of Resident Surgeon at the General Prison of Scotland, James Bruce Thomson, is, as mentioned previously, entirely a work of fiction.  However, the writer’s swift and economic characterisation and nuanced insights into human nature, combined with rich swathes of 19th Century vernacular, lend the novel an authenticity and vibrancy which is hard to better in modern fiction.

Not since American Psycho has a novel with an unreliable narrator (in the case of HBP, narrators) had such an impact on me.  The language is true to the historical period, yet still feels fresh and contemporary.  Scots’ vernacular is used liberally and unapologetically, and without the patronising habit of other authors I have encountered recently, who feel it necessary to offer immediate, direct translations of the simplest of Scots’ words. The construction of the sections, in both their length, tone and content is skilful and deliberately manipulative.  The epilogue is a piece of melancholy, wistful longing distilled into just 5 pages, and it includes a letter which is difficult not to read with a tearful eye.  It is a clever author indeed who can invoke such sympathy for a child-murderer.

Many of us like to use quotes when we write reviews.  They give a feel for the author’s language, as well as illustrating the reviewers’ opinions.  There are no quotations in this review – dragging them out for such purposes feels unnecessary and abusive of this work of art. Instead I choose French patisserie and vodka.  Well, maybe not the vodka.

His Bloody Project is a croquembouche of a novel. “Statements by Residents of Culduie” are the orbs of choux, nuggets of subjectivity carefully piped and baked in the reader’s mind, before being filled with a crème pâtissière of character, plot and action in “The Account of Roderick Macrae”. The caramel of the “Medical Reports” and “Travels in the Border-Lands of Lunacy” is the glue of alleged expert knowledge which seemingly gives a solid base for the continued construction of the whole. The reader is led to the apex of the croquembouche in “The Trial”, as the spheres of choux are methodically placed to form a delicious, beautiful and satisfying pyramid and sprinkled with the spun sugar of “Epilogue” to produce the final, spectacular effect.  Devoured, the glorious illusion is destroyed with the words of the final lines, but such is the lightness of touch of Burnet, that the reader has become not a glutton, but rather an epicurist.  His Bloody Project is of gourmet quality, and I hope to feast on more at my earliest convenience.