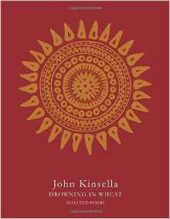 You sink in wheat.
Slowly. And the more
you struggle the worse it gets.

So warns the title poem of John Kinsella’s recent selected works. Children “on every farm” across Australia have been issued this warning, alert even “in the midst of play” to the “acrid / chemical smell / of treated wheat”, and the “grains / in the hourglass / grotesquely swollen”. His early life on a farm in suburban Perth evidently instilled in Kinsella a love-hate relationship with the teasing hazards of agricultural environments. But despite the poem’s warning, its title turns into an invitation when applied to the collection as a whole. Immersion in Kinsella’s world of silos, sheep and “magic” sunsets will shatter certain pastoral illusions but will leave the reader with a sense of respect for the stewards and custodians of land, past and present.

Sensitive to the particular issues facing Australia as a result of racial prejudice and the changing climate, Kinsella is a poet who is perhaps unusually open about his eco-ethical agenda, ending his “Acknowledgements” with thanks to the “traditional owners of the land” as well as “the land itself”, and being overtly critical of the “don’t-give-a-damn / brigade” in a poem called “Harvest”. He is in fact currently Professor of Literature and Sustainability at Curtin University – a position about which he might, however, be said to entertain a degree of scepticism given his poem “Forest Encomia of the South-West”. Alert to the inadequacies and hypocrisies of contemporary environmental discourse, in this poem, he claims that “Sustainable” equals “the commiserating blocks on the forest’s edge reaching / into the forest bit by bit with the environmentally-minded / eroding their privilege bit by bit”; “the forest-loving dope-grower who crushes the micro / with every step”, and even worse, it equals “election promises”.

Environmental concern is of course only one aspect of Kinsella’s work, albeit a crucial one, which this collection reflects. He has held a number of academic positions in Australia, the UK and the USA, and is the recipient of many prestigious awards, including in 2007 the Fellowship of Australian Writers Christopher Brennan Award for lifetime achievement in poetry. In that lifetime he has produced over forty books, demonstrating formidable thematic and intellectual range. The irreverence with which he treats the giants of art, literature and critical theory is, for example, a sure sign of his familiarity with their work. A poem satirically entitled, “Sexual Politics In Eadweard Muybridge’s Man Walking, After Traumatism Of The Head”, offers an image of Foucault as “Powerless and fading” in the sedate light of a bedside “banana light”. In a particularly pleasing skit on avant-garde and bourgeois culture, the poem ends as

My favourite aspects of the collection are more tender works, though. In “The Sands of Djarlgarro Beelier”, for instance, Kinsella imagines with slightly embarrassed curiosity his own conception, “guess[ing] it was / in the house bought for the purpose. Bateman / Road, just up from Bateman’s Farm”. In several poems he probes his own genealogy, expressing in “‘Mouths all Coloured Green’” a bitter sadness at the plight of Irish ancestors too long dead to benefit from his compassion. A beautiful translation of Arthur Rimbaud’s “Le bateau ivre”, channels all at once Kinsella’s sympathy for the dead and for the non-human, and his evident affinity with late nineteenth- and early twentieth-century artistic movements such symbolism and expressionism. The boat, in its drunken melancholy,

bathe[s] in the Poem
Of the Sea, a milky infusion of stars devouring
Green azures; where – flotsam enraptured and sallow –
A pensive drowned man sometimes goes down

Back to drowning, then. Newcomers to Kinsella’s work, as well as existing fans, should accept his invitation to drown in the poem-sea, the wheat silo of his selected works.