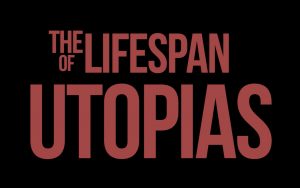 At our current juncture in the history of Dundee, we would seem to be on the cusp of something special with the V&A museum, which has already precipitated a wash of investment and improvement to the waterfront. Sam Gonçalves’ film is a timely investigation into the longevity, and afterlife, of such utopian projects.

A series of still shots of Dundee immediately displays the juxtaposition of the city’s architecture, from an abandoned house of grandeur to the sparkly, gentrified waterfront hotel. Further shots of the city’s skyline reinforce the chaos and disunity in the construction of a city. Tying this up nicely, the camera rests on cragged chimneys- reminiscent of a Parisian rooftop- as the narrator muses over their decline from the intended uniform design to individualistic leaning wonders, their purpose forgotten.

This carefully constructed introduction paces us nicely into the focus of the film: the Alexander Street multi-storeys from the seventies. And how better to introduce these buildings as “the hope of Dundee”’ than have a former resident, Steven, remember the marvel of moving into a home with an indoor bathroom. These towering beacons of modernity were going to finally push Dundee into a new and bright future.

Taking flight to Brazil, Sam uses his distant homeland as an example of a strikingly similar social project in its arc from utopian plan to reality.  Brasilia was a city built from scratch, mythical in its aim to eradicate social inequality, but we know how this story ends already: a concrete ghost town closer resembling the architect’s miniature model than the thriving hub of modernity desired. The excitement of the time is tangibly evoked through the request to listen to a piece of Brazilian classical music, supplemented by archival footage of fresh roads and buildings yet to be graced by people. However, they were to remain empty, as the narration tells of how lower income residents were still marginalised. Carefully selected footage enhances the continuity between Dundee and Brasilia, past and present. As we leave the archival footage of Brasilia, Sam’s smoothly integrated case study adds more universality and weight to the questions and answers he later poses.

Returning to Dundee with this message of failure, the film grows in confidence as the demolition of the Alexander Street flats is comically drawn out with the continuation of the hopeful orchestrated music. Moving into the present, the artist’s personal approach continues.  Seeking to capture an idealised shot of the railway bridge, Sam confides that his forceful pursuit of this image did not deter it from disappearing. As the narrator repeats “The dream did not materialise” so we cut back to a jolting close-up shot of the demolition of the Alexander street flats, the explosions violently cracking. And it is here that the issues of high rise living are confronted; the crime and dangerous conditions these buildings had engendered is undeniable, their fall from grace was swift and so the solution was to write them out of existence.

A candid interview with the area councillor reveals how the people were driven out without alternative accommodation– his words amplified by the sterile white cube he sits in, the kind of dehumanised environment that such decisions affecting so many are taken. Time lapse photography poetically displays the stasis the site fell into after the economic collapse- forsaking the decision to privatise the majority of the land. As the narrative of the multi storey flats is condensed to the cyclical “a dream becomes a nightmare”, we learn how in constructing the next hope of the city, the V&A, the rubble from Alexander Street was used.

The film retains a mature balance in refusing to condemn or mourn the multi story flats. Citing Steven’s memories of the close community that can perhaps only be created through such close proximity, the viewer is inclined to sympathise with the residents who had their livelihoods whisked away. The sober message of the predictable cycle of big budget, utopian, socially aimed projects, never lasting is answered by the call for multiple voices to make decisions for themselves, rather than the decisions of individuals for the mass. The last picture is of the rubble which we are told is now being remoulded into another project of hope. This may be a fitting tribute, and relight the dream, yet the irony of rubble from the last project feeding the next speaks for itself, reaffirming the doomed lifespan of these utopian projects.