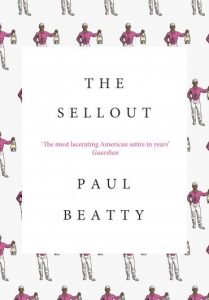 Paul Beatty’s latest work, Man-Booker Prize 2016 shortlister, The Sellout, is a novel about town planning. Not, perhaps, the stuff of what the New York Times has called “the most badass” American novel in years but, as Beatty’s vivid depictions of L.A. and Washington show, appearances can be deceiving. Above the Supreme Court of the United States’ “vaunted forty-fourth stair” is a “pediment inscribed with the words equal justice under law”, a motto which belies with outrageous sincerity the inequalities literally built into American life.

The novel opens during the longest Supreme Court case in history, Me v. the United States. Me is the surname of the protagonist, a young black farmer turned unofficial city planner charged with crimes “so heinous that busting [him] for possession of marijuana” would be like charging “a multinational oil company […] with littering”. On the death of his father, he inherits 205 Bernard Avenue, Dickens, a “two-acre, just-this-side-of-lunar-surface fertile parcel of land in the most infamous ghetto in Los Angeles County”. Gradually he brings order to the farm, producing harvests of fruit so sweet the judge sets bail at “a cantaloupe and two kumquats”. At the same time, the town of Dickens is erased from the California map, and its inhabitants go into meltdown. If cities are really nothing “besides signs and arbitrary boundaries”, the boundaries around Dickens prove crucial to the psychological health of Dickensians and the novel’s plot. Hoping to put Dickens back on the map, Me decides that, “like Paris has the Eiffel Tower, St. Louis the Arch, and New York an insanely huge income disparity, Dickens would have segregated schools”.

In a plot twist which intentionally leaves readers squirming, part of the corollary of the segregation is that school grades improve. Me’s occupation is key: “farmers are natural segregationists,” he says, “we segregate in an effort to give every tree, every plant […] a chance for equal access to sunlight and water; we make sure every living organism has room to breathe.” Beatty challenges the reader’s assumptions throughout, advocating critical attention to America’s cultural history and practices, however discomfiting.

This is one of the political points the novel makes – Me gets charged with a crime which U.S. government policy, the media, and the built environment commit every day, and for the wrong reasons: “All it takes is a day trip through Georgetown and Chinatown […] for the message to become abundantly clear. Be it ancient Rome or modern-day America, you’re either citizen or slave.” L.A., too, is a “mind-numbingly racially segregated city”, with nightclubs, jailhouses, beaches and street signs all participating in “social apartheid”.

Following in his sociologist father’s footsteps, Me takes on the mantle of “nigger-whisperer”, averting psychological catastrophe amongst the Dickens community at least once a week after the town’s erasure. In essence, the novel illustrates with grim humour the effects of acts of erasure, neglect, and denial on the experiences of its black characters, at the same time as it resists the homogenization of those experiences into “black identity”. Beatty is both kind and cruel to his characters, Marpessa, Me’s friend and ex-lover heartbreakingly underemployed; Hominy Jenkins personifying a “Classic American Stereotype” as the aged ex-“stunt coon” for the Little Rascals, and Foy Cheshire, blinkered and conservative, but deeply earnest about the cultural value of his reimagined versions of American literature – The Pejorative-Free Adventures and Intellectual and Spiritual Journeys of African-American Jim and His Young Protégé, White Brother Huckleberry Finn. Beatty is kind and cruel to his readers, too: the novel is controversially explicit, and Me’s narration wry, lyrical, frighteningly insightful. But with that comes a direct challenge; to see and acknowledge “the ‘n-word’”, to examine your reactions to it, and above all, not to “blame Mark Twain” but to “have the patience and courage to explain to your children that [it] exists”. This novel angers, invigorates and hits you with some great punch-lines – it gets my vote.