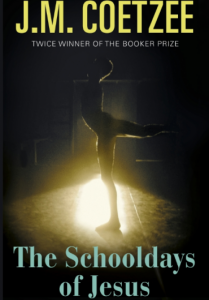 Coetzee is canonical, curricular – you are unlikely to reach the end of an English degree without having read his Booker and Nobel prize winning novel Disgrace. Coetzee’s mature novels are dazzling, harrowing and beautifully written, in taut, elegant prose that never turns away from the sorrowful, traumatic or debased aspects of humanity.

This is, perhaps, what makes The Schooldays of Jesus all the more difficult to come to terms with. The novel is the sequel to the well-received The Childhood of Jesus, which was reviewed as “richly enigmatic” by The Guardian. The two books are not particularly novel-esque, in that they lack detailed setting, pacing, and their characters often seem to lack substantial interiority. This sparseness has a purpose, however: the characters echo character depictions in the Old and New Testaments, where people are often sketched partially and vaguely, and their stories told for allegorical or illustrative purposes. Interiority over-complicates the idea of self which, in The Schooldays of Jesus, is always secondary to the role of the characters as mouthpieces for ideas, philosophical conversations and musings on the role of manor the existence of good and evil.

Most of these cerebral questions are asked by, and their answers supplied to, a child called David, who lives with Simon and Ynes, neither of whom are his parents, in a small flat in an unremarkable town. His single passion is a mystical form of dancing, centred on number patterns, the “dance of the universe” as his teacher, Ana Magdalena calls it. David is “an exceptional child…. He is integral in a way that other children are not. Nothing can be taken away from him. Nothing can be added”. He is, of course, the novel’s allegorical equivalent for Jesus: resistant to authority and curiously intelligent. The problem with David’s “integral” nature is that it removes him entirely from behaving like a child. Instead, he behaves like a mechanism for generating philosophical enquiry, his main role in the novel to open up topics for debate. The characters of the novel are essentially irrelevant, designed neither to move nor to delight.

Even the murder of David’s dance teacher by a madman called Dmitri who worked for free as a janitor at the dance school just to be close to her fails to. Despite the fact that Dimitri had been taking David into a private room and showing him pornographic images, David immediately befriends Dmitri identifying the latter with Don Quixote, the protagonist of the eponymous novel from which David taught himself to read. On asking Simon why Dmitri is mad and in what way, Simon explains, “Don Quixote and Dmitri are very different kinds of people. Don Quixote was a good person, so his craziness led him to do good deed like saving maidens from dragons. Don Quixote is a good model to follow in your life…. But Dmitri is not a good person with a good heart.” Here, the allegory is heavy handed – but more than that, it lacks interest. By this point in the novel, it does not seem important to separate the good from the bad – there is simply not enough at stake for us to care very much. Even the slightly redemptive end of the novel falls rather flat.

Coetzee is an author whose career has been made from exploring the intellectual concerns of humanity. In this book, however, that interest has entirely taken over, leaving very little humanity, and mostly ideas that are rather dry, rather dull, and make the novel feel rather stale and flat.