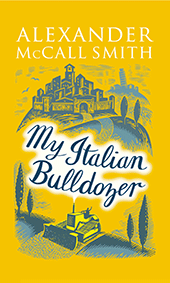 My Italian Bulldozer is billed as a modern Commedia dell’arte and as such includes all of the expected players: The lovers, La Signora (the scheming female figure), Pierrot (the sad clown), Il Dottore (the mad professor), and the commoners. Main character Paul is a successful food and wine author who is struggling with the break-up of his long-term relationship and the completion of his latest book. His editor (who is also in love with him) sends him to Tuscany help him focus on work and escape his gloomy private life. On arrival in Italy, and after a series of ridiculous events, Paul finds himself leaving Pisa with a benefactor in the form of a professorial knight, the unwarranted respect of an infamous criminal, and in possession of a rented bulldozer; a hulking, lumbering, yellow track ‘dozer.

Though the novel is in the vein of the ‘Italian pantomime’, it lacks the hectic zaniness typical of the stage performance, and indeed typical of Italian stereotypes; it is instead presented with all the energy of a sun-kissed stream meandering pleasantly through the Tuscan countryside, which is not a criticism. McCall Smith‘s gentle pacing, serene phrasing and mildly bemused main character are perfectly in keeping with the central theme of embracing the time and opportunity to really experience life. As Paul trundles through the Italian countryside, he finds that the height of the cab gives him an unrivalled view of the road ahead, of the world as he passes, and the vehicle’s size and bulk deter even the most aggressive driver from pressuring him to pick up the pace. The bulldozer becomes a metaphor for changing perspective and a literal vehicle for change as Paul is forced to slow down and see the world around him from a different viewpoint. While revelling in his literal new perspective Paul reflects that:

“[bulldozers are] honest vehicles – honest in the sense that they did not purport to be anything other than what they were. They made no statement; they said nothing about the people who drove them. They earned their living and made no demands.”

The idea of living your own life ‘honestly’ is typical of the author, who is known for weaving philosophical insight into his mildly madcap stories. In the course of Paul’s travels through Tuscany he explores futurism, the ethics of deception, biological determinism, the effects of cultural and political movements on local populations, love, and social expectation. Often this metaphysical exploration is inspired by one or other of the weird and wonderful happenings of Paul’s journey, but just as often it is Italy itself that encourages his ponderings. McCall Smith paints a vivid and beautiful picture of Tuscany, with rich landscapes, and boundless, impossibly blue skies that enchants the reader just as much as it enchants his characters; roaming past stony fields and olive groves in simmering heat, Paul is struck by a sudden, delirious joy:

“It was a form of intoxication, a relief from self, a feeling of a sort to accompany being picked up by the wind and effortlessly borne away to a place it alone decided.”

Like the bulldozer, his experience in Italy prompts Paul to examine his perspective. The country and its people bear the scars of millennia of fluctuating politics and conflict. Remnants of city-state governance, Fascism and religious influence create social and cultural difficulties and negatively affect local communities. Paul encounters people and places that are trying to shrug off their darker histories, to alter their narratives in a positive way, which is something that affects him profoundly: