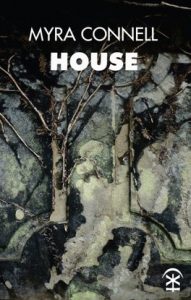 Myra Connell has previously released two poetry pamphlets: A Still Dark Kind of Work (2008) and From the Boat (2010). Last year, House, her first full collection emerged. People often view a house as protection from the outside world; its sense of safety may also extend, in certain cases, to protection from other people or even from the occupants themselves. A house, after all, is merely a structure – the inhabitants are what make a home. Here, Connell uses that titular metaphor to show how people have become disconnected from nature and themselves, hiding from truths and new experiences:

The tide is at the door,
and yet the woman says it isn’t high enough for bathing.
That’s a lie; she lied, […]
to stop the other swimming. (“One”)

Not only is this poem in free-verse, it also seems unconnected with its neighbours. This disconnection is true of all her free-verse poems, each with its own quirks and differences. Repetition surfaces sometimes subtly, sometimes more prominently – and enjambment appears. Parentheses are used with different effects in “She opened the glass door” and “Lexical (I)”. So what unites all this diversity?

Connell thinks carefully about diction and presentation, even in her titles which sometimes act as first lines; her later lines sometimes employ first letter capitalisation, sometimes not. She uses the former titles to create a conversational tone. A psychotherapist, Connell uses her specialist knowledge to invite her readers into the psyche of the many mysterious characters populating her collection, understanding the existence of hugely diverse individuals in a large and confusing world. As a poet, it seems that Connell is working in a not dissimilar way, fitting her poems into this wide-reaching collection. House is far from easy to define or decode. Yet I suspect that would not surprise or worry its creator. Certainly she harnesses our fear, and examines the contemporary modules of living which are not so much fearless, but overly protected. There is a strong recognition here of the long-term damage inflicted by risk-averse existence.

That professional background truly defines these poems. Consider her description of schizophrenia:

A chair there was, and on it I must sit,
because it stood there. It invited,
it commanded, me.

Typically, this poem tells of a person’s psychology via descriptions of household objects. Any attempt to lock yourself away from the world’s threats is often doomed to fail as a house cannot truly protect. Evil may find a way in, through illness, through thoughts, or like a thief picking a lock. Connell alludes to vulnerable traits – fears, worries and ailments. In “To J” her characters are anonymous:

you led us off again and round to where they waited.
You growled, harrumphed, and batted on your leg the map
to keep them back.

This poem is pure narrative, without thoughts, without conversation, allowing ambiguity and mystery, leaving the reader considerable freedom to bring their own contributions to the table, and to interpret its relevance to their own lives. In this case, the “they” and “them” are bullocks, standing innocently in their field. However humans deem these animals a threat, to be kept at bay; readers will draw their own parallels and conclusions.

House will open the reader’s mind to living. Life and death, surrender and passion, vitality and dullness are all here and are sometimes subtle, sometimes explicit… as is life. I suspect Myra Connell would want us to go out and experience life more. Who after all are her characters? One of them might be you. Find out. Venture outside your box, your mind, your house.