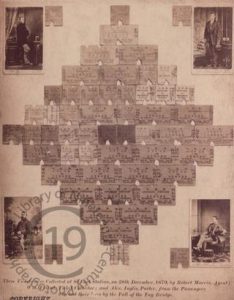 Tickets for Dundee had been collected from passengers on the train before crossing the bridge. A photograph shows the tickets [of] some who lost their lives that night. The Library of Nineteenth-Century Photography

The Last Train from St Fort

They have the stubs, some fifty-six of these,
each punched, a blank triangle nicked
from every ticket’s edge,

arranged into this neat display, framed up
and photographed, a wreath of non-arrival
commemorating those

they dredged out of the Firth, bedraggled
in their city clothes, or navvy’s gear,
sandbanks seeping from the seams,

and carted lifeless through the streets
they would have stepped on to that night
but for the force and angle of the wind,

and workmanship so bad it might have been
deliberate neglect; or some sick joke,
like that the men made later

from his name, damned Bouch: the bodger
who had flung them from the edge
of certainty; dashed Victorian assurance

that their Bradshaw was reliable,
the engineering sound; nothing could delay
the locomotive, not yet renamed The Diver

as it would later be, hauled out of the deep,
uncoupled from its ruined rolling stock
to ride the rails another day,

the monument from which it plunged
unwary through the chasm of the gale:
those stubs of pillars strung across the Tay.

The above poem was first published in The Rooftop Busker: New Writing Scotland 33 (ASLS, 2015) 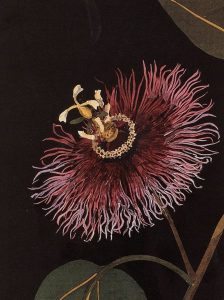 Idleness never grew in my soil, tho’ I can’t boast of any very useful employments, only such as keep me from being a burthen to my friends and banish the spleen…

The paper of a map fills in uncharted gaps
with coastlines fathomed in the round,
the cut of inlets, straits and estuaries,
pasted on to further segments of the globe

where botanisers light on strange exotics,
press them into service, dry amidst
the pages of the volumes they steer back
to native shores. And there a widow waits,

aged gentlewoman, time upon her hands
to find some fascination in the plants,
converse with men who studied them,
who grew them on in hothouses from seed,

and realise what she can do. Already skilled
in silhouettes, her dexterity with scissors
stands her in good stead to capture all
the gaps and crevices, the unfamiliar lines

of every new-found flower that so absorbs
her eye. No idleness is countenanced,
no need of an employ but this, her work:
the blossoms, bulbs and fronds she mimics,

leaves complete into the pages of her herbal,
tipping in the details of a world recorded
in mosaics so precise that science grows
the better, paste and paper chart its gain.