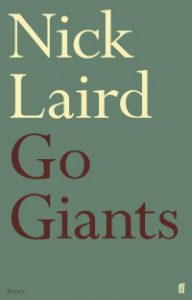 Laird and I share the hometown of Cookstown, Co. Tyrone, right in the heart of Mid-Ulster. A busy market-town, it was relatively quiet during the Troubles, in comparison at least with the hotspots of Belfast and Derry/Londonderry. But it was not untouched. This common experience of growing up a Northern Irish Protestant shadowed my approach to his collection with slight anxiety – would Laird over-dramatize or ignore these beginnings? I need not have worried, these poems do not disappoint.

Even before we get to the body of the poems themselves, Laird’s flyleaf prose poem is one at which you have to pause. He sets his work up for scrutiny by arguing that poetry is

…work done by the soul’s hands…a juncture of the two kinds of real[.]

It talks of shifting up and down the gears out the Orritor Road and indeed this is a useful metaphor to apply to Laird’s third poetry collection. These poems hold the road during frequent gear changes, being stylistically diverse and wide-ranging in subject. We are in the car with a poet who knows how to drive.

Laird manages to draw on his Irish lexicon in a subtle but authentic way; thankfully no cheap leprechauns and shillelaghs feature here. His Ulster dialect is sparsely employed and contextually assisted. References such as Eastwood’s fire sale, The Sash and the verb “to hoke” add a faithful quality to expat poems. Laird does this well. In “The Mission”, I can smell the tent and grass, stirring long-forgotten memories. For those unlucky readers who are not Northern Irish, there are also references to New York and Rome, amongst other places, which persuade me that the reader’s enjoyment will not be impaired by geographic or cultural bias.

The opening poem “Epithalamium” is written in the tradition of praising the bride and bridegroom on their way to the marital chamber. The newly married couple are separate, differing at times, but ultimately together. To me it seems entirely reasonable to read this first poem as also exploring identity, culture and roots; the question of interpretation is one of the joys of Laird’s layered and frequently complex work.

“Collusion” is a poem offering us overlapping circles of identity and references the sectarian violence of the Troubles. Ulster Protestants are encumbered with being seen as mostly Irish in Britain, British in Ireland and have a dual passport identity. Laird concludes with a sheep image, but not before he points out the inherent individualism of human beings, even in the communal act of communion:

…we knelt in packs
at altar rails on velvet pads
but still each pose was unalike[.]

Laird easily leans into the thoughtful and insightful, as in “The Mark” written in Rome’s Capitoline Museum:

Nature is precise in this.
It hurts as much as it’s worth[,]

and again in “Envy”:

and in large despair I launch plots against my neighbour Gwen
who’s also lost and carries round the same hot pennies of un-
happiness.

He often stops to appreciate the significance of the small and ordinary and reflects this back to us without falling prey to false romanticism. “Talking in Kitchens” is a perfect example, a beautifully constructed, intimate portrayal of the ordinariness and extraordinariness of domestic life:

Here it is written down if I forget to say it –
my home is a temple made by your hands.

This collection, encompassing free verse, prose poems, sonnets and hymns, shows that this award-winning and deservedly acclaimed poet can write in any voice, any style and still make it his own. Go Giants offers the reader much and deserves its place on the bookshelf  – re-reading is a given.