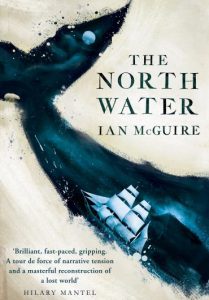 Ian McGuire was born near Hull and studied in Manchester and Virginia, USA. The North Water is McGuire’s second novel; his first, Incredible Bodies, follows the career of a University Lecturer. He is currently Co-Director of Manchester University’s Centre for New Writing.

It might have been useful for McGuire to begin this novel with the epigraph, ‘abandon hope, all ye who enter here’. From the outset, it is unrelentingly dark, visceral and violent. The North Water is a tale about a Mid-Victorian whaling voyage made by the ship, The Volunteer, from a Yorkshire fishing port to the Arctic Sea. Due to the conniving plans of its owner, the fate of The Volunteer is sealed before it leaves port.

The novel is peopled by a motley collection of characters. The main protagonist is the ship’s surgeon, Patrick Sumner, a laudanum addict who was dishonourably discharged from military service in India. The Volunteer is his only hope in finding a job. Although Sumner is the main protagonist, he is a curiously unsympathetic character. There is only one truly likeable character in the novel, the otherworldly harpooner, Otto, who accurately predicts the fate of the team. The rest of the cast are either victims, characters on the make or evil personified, for example, Drax, a psychopath whose corporeal unpleasantness is dwelt on by the author just as much as his hideously violent crimes.

Each of his movements is considered and powerful, his body, stinking and rotund as it is, clagged and filthy in its folds and creases, possesses a ghastly voluptuousness nonetheless.

Drax hesitates a moment, then holds out his arm. The wound, high on the forearm near the elbow, half-hidden by hair and ink, is narrow but deep, and the site around it is severely swollen. The skin, when Sumner touches it, is tense and hot. An areola of green pus has gathered around and below the scabbing. And the scabbing itself is sticky and raw.

A feeling of inevitability about violence permeates the novel; as one horrible episode comes to a close, the reader can only be sure that there will be another one waiting to outdo the previous carnage.

The North Water’s language is also unconvincingly modern. Its ubiquitous swearing gets in the way of the narrative in that the swear words used in the novel seem more akin to the language of the present day  than mid-Victorian seafarers, who would have used oaths, curses and blasphemy. In the excerpt below, Sumner is buying medicines from a pharmacy. His conversation with the pharmacist follows:

You think I’d trouble Baxter with shit like that?’ Sumner says. ’He’ll be troubled
when he sees this fucking bill. I know Baxter and he’s a tight-fisted cunt.

There are some errors in detail too. Baxter, the wealthy owner of the ship, is described (and here the author rather unsubtly appears to suggest that the character is homosexual), as wearing a lace trimmed coat. Even the most sumptuous Mid-Victorian male outerwear would not have been lace-trimmed.

One redeeming feature of the novel might lie in its portrayal of the Greenland Inuit people. Their knowledge and resourcefulness contrasts greatly with the haplessness and brutality of the shipwrecked seamen. But once again, the inevitable horror and violence of the novel reaches into their ordered world. Animals too are victims of pointless cruelty. Even if the modern reader can suspend their disgust at the whaling industry per se, the too numerous instances where wildlife and domestic animals suffer terrible injury and death seem suggest a gratuitousness. The aim of the novel seems not just to depict a heartless society, but to revel in it.

There seems to be a trend in historical fiction to depict in the most graphic detail the squalor of life as it was lived prior to our sanitised environment; for example, The Crimson Petal and the White by Michel Faber.  But even in McGuire’s first novel, which is set in the present day, he wallows in the visceral and the mundane. His work seems to reflect a world-view that is entirely bereft of beauty or hope.