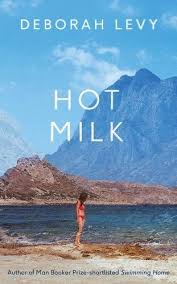 In an interview given at the time of her previous Man Booker nomination in 2012, Deborah Levy is recorded as saying, “I want to walk my female characters into the centre of my work. They don’t have to be likable but they have to be compelling and complicated.” Well, Hot Milk’s cast of women – Sofia, Rose, Julieta, Ingrid, and other minor ones – are, as she promised, complex, striking. They are, above all, puzzling and their behaviour invites interpretation. The latter is, of course, testament to Levy’s longstanding fascination with psychoanalysis, a discipline latterly preoccupied with femininity, sexuality, identity, the unconscious writ as bodily symptom, the hysteric speaking between the gaps in the “Symbolic” (language as a patronymic system of signs).

Hot Milk is no warming cuppa but a scalding mug of repression, desire and unspoken emotion. Here daughters battle for survival against powerful, manipulative mothers, see their plight as women replicated in lovers, rivals and friends. The novel centres on Sofia, the novel’s narrator, and her invalid, hypochondriac mother, Rose; the cast also includes Sofia’s sometime lover, Ingrid, and Dr Gómez the physician-analyst (replete with Blofeld cat) and his daughter nurse, Julieta (or Nurse Sunshine). The meaning and importance of their relationships with Sofia are rendered as vignettes or encounters, and mostly cast wryly comically; these work associatively to circle around the book’s central themes.

Hot Milk makes no apology for centring on women’s subjectivity and identity; why should it? Yet the men in Hot Milk are no cardboard figures either – Levy’s restaging of Dr Gomez as a Freud-like figure is deliciously comic and not at all villainous. However, they are bit-part players in this theatre even when they occupy prominent positions of power as fathers, analyst-therapists and lovers. If all this sounds too intellectual for most readers, think again; Levy has the magic touch. She dramatizes the difficult mother-daughter relations so well – not in dense technical jargon for only the academically-initiated, but lightly, and with real feeling. The co-dependency that characterises Sofia and Rose’s mutually destructive relations is embodied through a limp that Sofia reflects on with melancholy, “I am twenty-five and I am limping with my mother to keep in step with her. My legs are her legs. That is how we find a convivial pace to move forwards”. The stinging, venomous medusa jellyfish that float around the coastal Spanish resorts leaving “fierce purple whiplash welt(s)” point to the destructive but majestic relationships between the women in the novel. Love, beauty, resentment and murderous thoughts can’t be separated. All heady stuff.

Much like Freud’s Dora, Sofia (goddess of wisdom in Greek mythology), is articulate, intelligent and, actually, not in much need of analysis, even when she finds it difficult to break with established patterns of behaviour. Sofia has Margaret Mead quotes on her room’s wall, cites Walter Benjamin’s angel, blown backwards on the winds of history, and ponders the interface between ethnography and psychoanalysis as observing, interpretive arts; she also uses such knowledge to understand relationships. After reuniting with a father who had walked out of his first wife and child, Sofia says: “[My father] wants me to see his new, happy family from his point of view. Look at our calm resting! Listen to the way we do not shout! Observe the way we all know our place! Look at how my wife manages our needs! My view on his family is required to be his view on his family.” Christos’s use of his new family as a shield against his daughter’s needs, represented here by his thought-but-unspoken comic exclamatory barks, is finished off with Sofia’s sardonic reminder that “Point of view” must become her new subject of study. Sofia can also, of course, sometimes (and wilfully) misread. Hot Milk’s singular narrator might offer only one side of the story but what an intelligent voice to fall for.

In sometimes poetic and hallucinatory imagery, in sometimes oddly Mel Brooksean set pieces, albeit never tipping into the parodic, Hot Milk is fiercely intelligent, funny and knowing about women. What is there not to like?