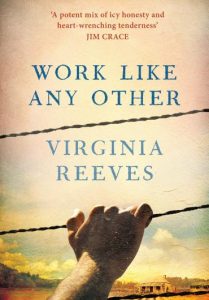 A graduate of the Michener Center for Writers at the University of Texas, Virginia Reeves has produced Work Like Any Other as her debut novel, a remarkable achievement given its impressive authenticity and potency. Apparently, after seven years of life in the wide-openness of the lone-star state, she has now moved back to her home town of Helena, Montana, a state even better known for its vastness and emptiness, but Work Like Any Other is based in the heat and close-confinement of the southern state of Alabama.

Her opening paragraph describes the event around which the story revolves: Roscoe T Martin, an electrician married into a farming family, takes a feed from an electricity transformer to fuel the family farm and its machinery without permission. This theft does not come to light until a young man, George Haskin, is electrocuted after coming into contact with the wiring, and the offence is compounded by the jailing for ten years of the black farmworker who Martin has coerced into helping with the theft. Martin is sentenced to twenty years in prison; at this point the book changes from present tense to past tense, and from the first person viewpoint of Martin in his years of incarceration to the third person reportage of events around Martin’s unresponsive wife, Maria, his son, and the farm itself.

Life in prison, in the strictness of this Alabama state penitentiary, allows him to look back at events, at his wife’s displeasure at him over his lack of interest in the farm and the way she distances their young son from his father. That is until the farm becomes a more prosperous, debt-free concern when the free electricity helps boost profits and machinery efficiency, and his relationship with his wife and son is cordial, even loving. He finds out that his wife will spend funds on providing a lawyer to defend the black employee, Wilson, but not her husband. In effect, his wife abandons him completely, refusing to answer letters he sends. He stops sending them, but keeps writing and gives them to an inmate who is about to be released. He finds solace in the idea that his posted letters may not have reached her, but “deep-down” he knows the futility of this.

Reeves evinces a mastery in word economy, and this helps to make the book a compelling read. Her depiction of prison life, of its denigration of human existence, and the apparent contrived air of hopelessness for prisoners, is stark but excellently crafted. Martin loves electricity, and thinks that, by offering to re-wire the broken down ‘electric chair’, the powers that be on the parole board might see him in a positive light. This idea backfires – they refuse citing, “You have succeeded in electrocuting a man, but you did so by accident. I’d hate to see what would become of the poor fellow you intentionally tried to kill”. The irony of this statement is not lost on a giggling guard, but it is on the man who said it; the man who holds the future of Roscoe T Martin’s prison sentence duration in his hands.

There is a moral tale in Work Like Any Other but it doesn’t gush and judgements are left to the reader. Martin was doing his best to help at the farm, to help family relationships, and to do the work he loved for the right reasons. The theft of electricity would have been minuscule or even unnoticeable to the electric company because so much leakage happens anyway – “ a drop of water in a lake” is how Roscoe describes it. Yet this act killed an innocent young man and in a way that is graphically described. We are left with an irredeemable marriage, a sorrowfully wasted life in jail, and the strong feeling that a decent man has paid a huge and everlasting price. All this makes for a very good, yet, at times, disturbing read.