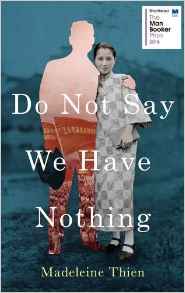 Madeleine Thien is not unused to being shortlisted for prizes, or winning them. Her previous work Dogs at the Perimeter was shortlisted for Berlin’s 2014 International Literature Award and won the Frankfurt Book Fair’s 2015 Internationaler Literaturpreis. She, as with the narrator of Do Not Say We Have Nothing Marie Jiang, is the daughter of Malaysian-Chinese immigrants to Canada.

The novel follows the story of ten-year-old Marie – Jiang is her Chinese name – as she becomes close with a houseguest called Ai-ming, who joins Marie’s Canadian household from relatives in China. The novel splits into two narratives: one following this relationship as told through Marie, and the other travelling back to the teahouses of the 1960s as Chairman Mao first rises to the Shanghai Conservatory. The latter prose follows the line of Ai-ming’s musical family – Sparrow, Zhuli and Kai – throughout the events of political distress up to the Beijing demonstrations of 1989.

Stories of historical fiction, I feel, can often be forgotten as soon as they’re learned – a danger in all stories of the past is that the lessons of history are left in the past as well. Though we feel the distress of the characters of the past our temporal existence sometimes acts as a buffer, shielding us from any lasting connection of empathy. But Thien rescues the novel from this trap of the “already happened” with a dual storyline. Most of the characters and drama happen in a third person and is of a time before ours, but every so often a fragmented first person narrative intervenes and thus frames the past from the viewpoint of the present. Marie Jiang’s personal journey into Beijing is, of course, closer to the reader’s; her narrative counterpointing allows history as a story of not of numbers but peoples and relations. We connect with Marie, Marie with Ai-ming, and Ai-ming with others in the past.

The success of Do Not Say We Have Nothing lies in the fact that the novel is not just the depiction of past time but a visceral history; we experience how a Canadian woman of Chinese ancestry can feel personally the hurt of a time and place before she was born. Her writing critiques the past but she also undertakes it with acerbic humour: “Like thousands of other surviving counterrevolutionaries, she would be informed, after years of prison labour, that she had never been a criminal.” Her voice here is neutral, without emotive language, calm and matter-of-fact. Considering the novel’s basic concerns, the sentence’s deadpan tone is in itself a criticism of the situation.

Balancing this distancing, Thien can produce vivid pictures: “Just then, Ma detached another sizable chunk of hair. It fluttered, as if still breathing, to the floor.” The sound and pacing of sentences like these let the image breath, enabling the reader to linger on their beauty. These snippets of calmness and joy, are dotted about the book. The author chooses to use them for moments that deserve them. Thein gives lines like these extra lyricism so as to catch and preserve them. Readers won’t forget them easily.

The novel offers a clear depiction of a moment in China’s history, and a vivid image of the cultural changes and political movements that lead to the events at Tiananmen Square, creating a vivid impression of life between the facts. But Thien’s book is not non-fiction, rather historical fiction. After reading the novel, I thought that sometimes it isn’t the positions of each army, the ideology of Mao’s party, or the number of dead – those broad-brushed accounts – that make history real. Sometimes what makes history tangible is knowing what happened when Zhuli and Kai perform Sparrow’s music, or that Marie Jiang was given two names by a father that left her twice, or that Sparrow was mistaken for a spy.  Or that Ai-Ming perhaps needed “to live unobserved.”