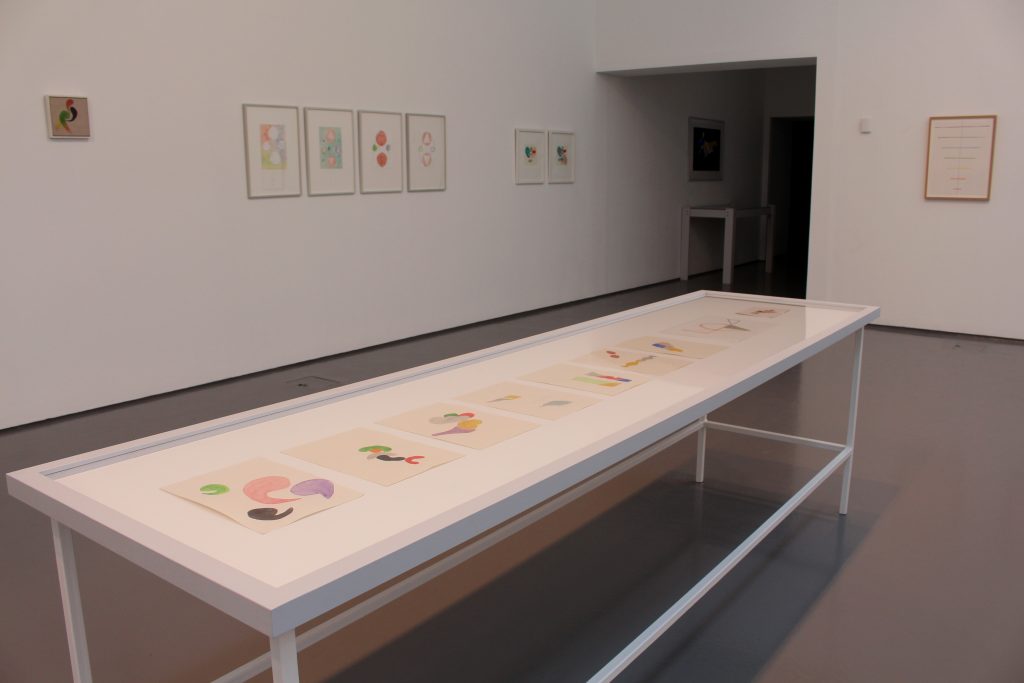 The DCA are giving audiences a new chance to see the work of the much acclaimed artist Katy Dove in a memorial exhibition. The works exhibited range the full breadth of her artist career and even include animations she made while still a student. Dove blends sound and image in her playful animations creating hypnotic viewing experiences.

The exhibition is spread out across two rooms. The first room holds framed drawings and watercolours on paper, which are mounted in clusters around all four walls. A selection is also shown in a glass cabinet in the centre of the room. Dove’s artistic process often began by spontaneously making marks with watercolour and felt-tip pens: exploring colour and forms using geometric and simple shapes. Some only contain one solid form, while others are built up from a number of shapes and contain multiple, bold colours. The shapes became the material used in her animations. In the small connecting corridor between the two galleries is another cabinet. Demonstrating Dove’s explorative nature with material and form, the cabinet contains a selection of early stitched works, showing that Dove experimented with different surfaces and textured qualities such as thread and fabric.

Entering into the darkened Gallery 2 viewers are instantly aware of a peculiar fusion of sound that is neither identified as music nor spoken dialogue. Repeated, rumbling hums are mixed in with electronic strumming. The space opens up to show three large projections that are well positioned in the room and create an airy and open atmosphere, perfectly suited for viewing the large scale projections. Rows of comfy seats are placed in front of the two nearest screens and on them are sets of headphones. Watching the animations becomes an isolated affair and the viewer becomes unaware of what is going on around them as they are immersed in the images in front of them.

Dove has a high command of colour and rhythm and this is particularly evident in Luna which is most characteristic of her recognised style. Moving on a 2D plain the group of watercolour shapes chase around the screen in time with the soundtrack of a ringing bell: creating a constellation of fluttering forms. With the layering of more sound, this time gentle humming and occasional crickets, comes the layering of more shapes. Some are repeated to form swirling patterns while at other times distinct shapes come together to create arrangements, such as faces, before dispersing again. It is very hypnotic. 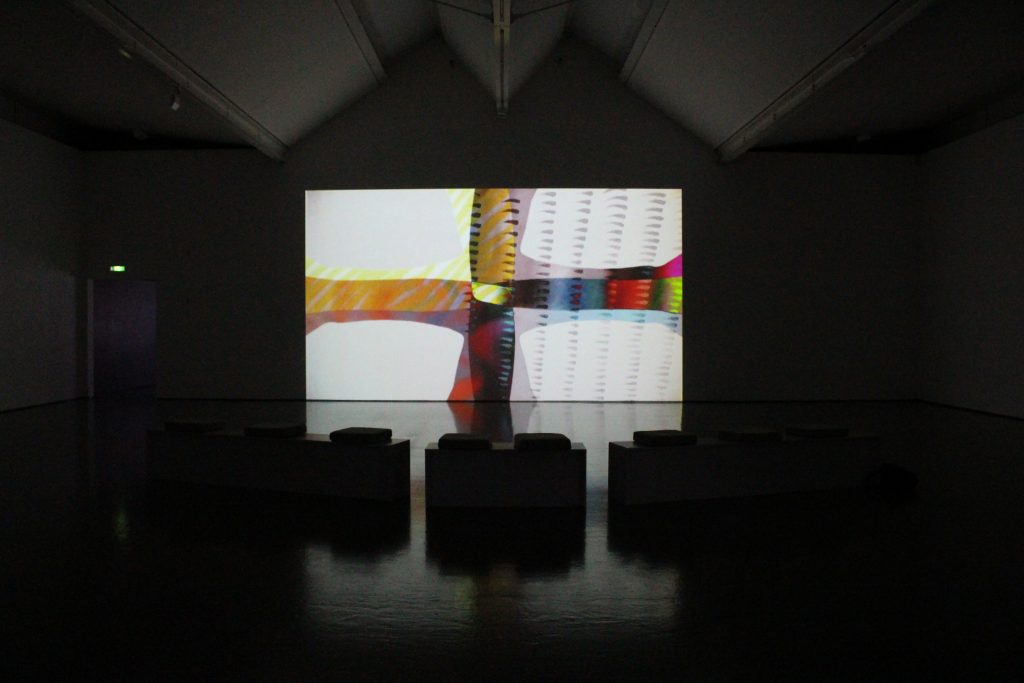 Melodia is perhaps her most sentimental animation. A watercolour painting of a peaceful loch by her grandfather is used as the backdrop of the work. Dove’s shapes explore the landscape through contemplate motions as they dance around the grassland and up into the sky. The piece is set to the soundtrack of Jörg-Maria Zeger’s I Kut. Her shapes interact with elements on the surface, mirroring their forms and giving life to the original painting: red leaf like forms are blown towards a cluster of trees and nudge their way amongst the branches where they rock slightly in the wind. The harmony between her grandfather’s painting and Dove’s own shapes is a beautiful expression of the sympathy and consideration she has taken with spending time to fully observe the painting.

There are many more works on display and Meaning in Action is worth a mention. Branching away from the abstract, watercolour shapes, Meaning in Action is created by overlaying silhouettes of moving body parts which are filled with pastel patterns. This performative element adds a new level to the rhythm of the work and the silhouettes sway, pulse and recede in time to the heavy, grinding guitar soundtrack.

Dove has deep roots with the DCA, having worked with the exhibition programme and the Print Studio. This is an exhibition dear to the curator. The work has been exhibited with respect and the decision to show the animations on large screens in a simple set-up creates a meditative space perfectly suited to the nature of Dove’s work.