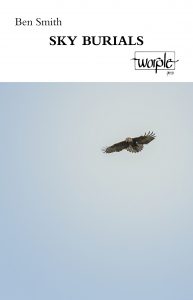 Ben Smith impresses his readership with colourful poems in his newest collection Sky Burials. His academic specialisation in Environmental Poetry is represented – playfully – throughout this entire collection. With this contradictory title, the poet does not only offer an oxymoron by endowing the sky with an earthly attribute, but also introduces a criticism of much received wisdom on environmental issues.

In burying the sky, Smith addresses climate change. He enforces this criticism by finishing the collection with the titular poem.  If we focus on the last two lines “storm after storm / after storm.”, we become aware that the poet implies an eerie, unstoppable force – in the very spirit of climate change – that is enhanced by repetition. This element of repetition could also stand for the continuous mistakes – such as pollution or emission of carbonic acid gas – that societies are making continuously. As the back cover states, it contains “[…] poems that explore prophecy and ritual […]”. Thus, the mentioned mistakes might be an iniquitous human ritual against nature.

Taking the point of view of the sky itself, “I will become cumulus and altostratus/cirrus and mackerel sky/troposphere, mesosphere, ionosphere[.]” Here, the poet increases his former critiques and forges a personal bond between the sky and the reader. This special connection with nature is made in many other poems too, “told” as they are “through the voices of birds, unreliable seers and broken bones found in rivers and museums […]”

Consider, for instance, “Oystercatchers”. Voiced by the bird, the reader can overlook its agenda of survival … its need to catch food. Obstacles might come in the way, like “the flexing of tides”, time may pass and seasons change “like the sand / re-layered over winter / into new drifts and pebble beds.” Some are left to grow older “And, like shells, our beaks clack and grow / broadening / hardening / layer on layer”. We receive a complete overview of the birds’ lives. The similes of the oystercatchers’ food source, their relationship to it and the sea “like the pebbles / turned hard and smooth / by the water’s endless turning” demonstrates the cycle of life and the interconnectedness of all beings. This, and many other poems, catch the reader’s eye with careful use of shape on the page. Words and lines are specifically arranged to create an illusion of waves. Enhancing the simile of the oystercatchers and the sea with visual tricks, the poet again shows us that universal bond but in doing so, he does not forsake his descriptive powers, and the environment of the oystercatchers is viable, visual and tangible.

“Turnstones” is another example of this sophisticated technique. Again, we dive into the nature of the turnstones and their hurdles – from the birds’ perspective. This time the poet ramps up his criticism of human lifestyle by setting his work on the beach where the tide has brought in “all kinds of waste” now gathered on a single spot. The structure of this poem is less wavy than “Oystercatchers”, which might indicate a comparatively calm sea in contrast to the coast’s roughness; equally, it might offer a presentation of the “wrack line” into which the turnstones “disappear” . The repetitive use of the personal pronoun “we”, of course, stresses the flock, but also it points out that there must be a “they”, if there is a “we”. Reading “we” makes the human reader feel excluded which tends to lead to the conclusion that the missing “they” in this context must be the human race – who cause the pollution that looms at that seaweed line.

In placing a bird on the cover, Smith announces the voice of his poems, a voice which can be heard, with consistency, throughout.