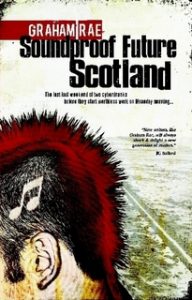 The year is 2116, and the place is an Independent Scotland. The Battle of the Sexes in which “men killed women killed men, fathers killed mothers killed fathers, daughters killed sons killed daughters …” (you get the idea) is 20 years in the past, superseded by a period of “kissing-and-making-up-and-fucking”. This results in the massive overpopulation of the planet, thus leaving the story’s two main characters (Johnny Certex and Ratsoup, two out of the many ‘teenragers’ living in Satellite Town) as the pitiful very-soon-to-be-occupied-by-them positions as “hovatrasha” operators, picking up holographic litter around the streets of their hometown.  (Still with me?)

Their last weekend of juvenihilistic freedom is by far the best record of (un)lived) experience I have ever read. The portrait of future Scotland has never been so anti-culturally rendered as in Soundproof Future Scotland:

Even though the time-span of the story takes only 48 hours to wind up, Rae makes sure that the narrator does not skip any move made by the madcaps. Their two-day schedule exposes the future’s “hi skool” lifestyle – full of sex, drugs, booze, digigaming, holoshowz, and, most importantly, “protocore muzak”.

Johnny and Ratty take us on a walk around Satellite Town. A “slimy residue of shit and saniroll” has left the city with a unique and long-lasting smell (“Eau de Satellite”, as Johnny market-orientedly bottles it). Neighbourhoods such as “Cock Block”, “Tartan Block”, “Starliner Block” are only some of the places to become familiarized with, full of “foolball-follower fighters” and “traceball-cap-wearing nedz”.

“Soundproof” is Johnny and Ratty’s five-man band. Into one of their rehearsals, the reader is left utterly appalled by hearing the protocore “slab” set-list with slab-titles such as “Fuck the Ozone Layer”, “Boardumb”, and “Smotherfucker”. Even more so is he disturbed when the guys’ mental absorption of gaso and bottles of Tenafly Viper (only some of the lethal substances abused by the “muzakians”) turns the scene into a “strange-sounding obnoxious soundcloud [which] slowly filled the room as each band member went off into their own wee private jamworld.”

“THE FUCKING WORST FUCKING BAND IN THE HISTORY OF THE FUCKING WORLD”, are the lead-singer Johnny’s concluding lines; these are followed shortly by more booze, sex histories, and “pathetic no-shame-no-blame” drunk blackout amnesias …  (Unexpected, eh?)

The suddenly excited-as-fuck Johnny sat bolt upright on the sofasogood as the slowdown remembrance of JUST WHAT FUCKING DAY IT WAS suddenly crashed full force into his consciousness.

Johnny and Ratty are depicted going to VeloCity to a concert of their favourite American protocore band “Empty Vessels” (this part of the novel does not much differ in stylistic arrangement and witty quips); here, however, the characters are faced with the politically-(dis)oriented Scottish hactivist organization “Gael Force”. This experience slightly alters the undercurrents of the novel, widening its historico-political scope, though quite not very significantly.

Brief history lesson: After a nasty, negative, rigged, Wasteminster-propaganda-fueled independence vote failed in 2014, Scotland finally became independent later in …  and so on, and so on.

Johnny’s post-gig conversation with the lead-singer of the “Empty Vessels”, Kogar completes the overall picture of Soundproof Future Scotland in an ever-revealing American didacticism, which, in 21st century literature, would have been the unravelling moment:

Why should there be future generations? What is their purpose? … A longing for anything good or better or transcendent is just a religious concept anyway, some sorta halfass bullshit afterlife fantasy.

“What a portrait of dynamic young Scotland.” Soundproof Future Scotland is really a thoroughly amusing counter-cultural read which hides a portrait of a degraded Scotland behind its humour…