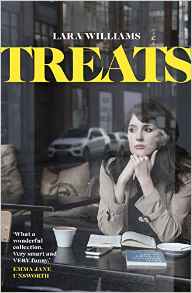 A title like Treats suggests a lot. But be warned: the flavour of the short stories in Lara Williams’ debut collection is mostly one of bitterness and regret. These short short stories – 21 of them in a mere 120 pages – give a very bleak impression of modern existence.

Written mostly in the final 12 months of her MA in Creative Writing at Manchester Metropolitan University, a sense of urgency permeates Williams’ book. Her prose shows life in fast-forward, often with weeks, months and years’ worth of disappointments inflicted on her characters in the space of a few pages. The very shortness of the stories contributes to that panicked sense of life dribbling through fingers while still stuck working out what to do.

The modern pressure to BE something looms large. One character debates on how she is going to “pitch” herself to her date; another tries on a “cool guy schtick” persona like a new set of clothes. It all feels like a race to find better versions of themselves before it is too late. Williams’ background as a musician and a journalist lends an authenticity to her cultural references. But it also seems to have given her a strong awareness of the world around her, and a wider understanding of what it means to be in your late 20s and early 30s now, when, terrifyingly, choosing to “watch rolling trivia on YouTube” or “scraping the thin blade across your wrist” can both be presented as perfectly understandable life choices.

Williams tries different ways to present her lost souls, from traditional first and third person narratives to the more unusual second person that she uses in a number of stories such as the opener “It Begins”: “You graduate university. You move back home, slotting neatly into your single bed, examining the tears in the wallpaper.”

What follows is ‘your’ five page descent into despair and only at the end is there a hint that maybe, just maybe, ‘you’ might survive all this. It sets the tone for the book. Moments of redemption in these stories are few, and when they come are mostly fleeting. The initial use of the second person is interesting,  succeeding both in unsettling readers and forcing them to recognise themselves in her characters. Yet by the third or fourth time, the effect becomes just a little diluted. The same is true of other literary fireworks; a couple of the stories conclude with proper, punch-in-the-face twists but after reading a couple more, the twists feel over-done.

Treats contains some lovely writing, and yet, for all that, the stories do feel hit and miss. Descriptions like “rain… slapping against my skin like an embarrassing sex sound” might raise a smile. Quieter moments, such as when one character reflects that “She liked the word wherever. She liked the shared e”, provide welcome moments of respite from the gloom. My favourite story ‘Toxic Shock Syndrome’ is a belter. It purports to tell us the woes of a girl, continually judged for being ‘big’, before making us realise that such hang-ups are, in fact, our own and that this big girl is doing fine and well, thank you very much.

There is no doubting that Lara Williams’ writing gets under your skin, sometimes painfully so. But reading so many short, sharp shocks, the alienation can end up being a bit, well, alienating. Yet even when what she is doing doesn’t quite come off, there is plenty to be found in her work that makes her a compelling writer.