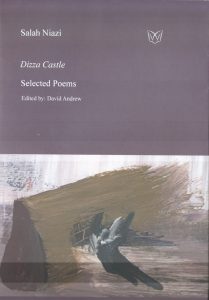 Dizza Castle is a collection of poems by Iraqi poet Salahi Niazi, selected and edited by his friend David Andrew. This collection introduces Niazi’s work, which is originally written in the poet’s native Arabic to an English-speaking audience. Considered to be one of the pioneers of Modern Iraqi Arabic poetry, Niazi is a hugely prominent figure whose literary works include publications of several collections of poetry, books of criticism and Arabic translations of Shakespeare plays and James Joyce’s Ulysses.

The first concern one has when faced with a collection that has been translated (and in some cases here, translates across two languages) is one of meaning. Reading a works in a translated language begs the question of how close it is to its original. Translating poetry from a language as old and complex as Arabic risks straying perhaps from the poet’s initial intentions or expression. Often there are words and phrases which cannot be accurately translated because there is no equivalent in the translated language. Therefore, we must substitute the closest possible representation – this is where the issue of potential distortion lies.

Further concern lies the knowledge that there are many taking on the task of translating Niazi’s work. Having multiple translators may result in more semantic drift. Despite this, we must trust that the translators, editor and poet have worked to bring a collection which reflects the essence of its Arabic original.

In Dizza Castle, certain qualities still remain and transfer over into the English edition, such as the sense of mysticism and beauty of the Arabic language with its water-like flow, with lines and stanzas streaming seamlessly into each other. Andrew achieves this by employing a long sentence structure in end-stopped lines:

And she listened as trees listen
One sought her friendship in a widening circle
I passed and passed again before her
And she imperturbably, continued to listen
She only once changed her black bag studded with drops of silver
now holding it in her left hand…

At times this silken flow is quite naturally reminiscent of the recitation of Quranic verses which only add to the poetry’s unique aesthetic. Indeed, poems such as “Wind” hold the appearance of a translated verse from the Holy Book with its powerfully direct register and first-person narrative structure:

I am your lord
And I am on the throne alone,
There is no God but me,
I am the shooting stars,
The clouds are my men,
And my ready troop of horse.

The references to Islam occur frequently throughout the collection either directly, or through imagery and suggestion whilst simultaneously highlighting other current topical issues such veiling in as in the short piece “The Return of the Veil”. Through its images of larks and “slamming of a door”, the poem raises questions of modesty amongst women and its meaning in a Middle Eastern or Islamic context.

Niazi’s commentary on thematically complex issues such as war, exile and passion are addressed through poignant imagery and diction. Often the imagery is also that found in many English poems, even those filled with nature and larks – all of which offer a familiarity. However others are more colourful and exotic, and even seemingly supernatural:

With her most beautiful aura she moves without moving, her white
trance
spread over the Euphrates from bank to bank.
Nature’s elements unite in one picture…

Although  reading translated poetry might at first bring certain anxieties, these are very quickly put aside with Dizza Castle; those collaborating on this collection have managed to retain the aesthetic and essence of poetry rooted in an ancient and complex language. The beauty of language, be it Arabic or English, is very much apparent in this powerful and striking collection.