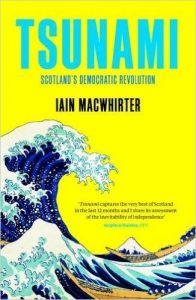 Deemed by publisher Freight Books as a ‘vital analysis of the state of the nation following the SNP surge at the 2015 general election’, Iain Macwhirter’s Tsunami: Scotland’s Democratic Revolution is a unique insight into the 2014 Scottish Independence Referendum and its aftermath. Considering Macwhirter’s first-hand experience in the political arena (his work as a political commentator for prominent newspapers, the Herald and the Sunday Herald, as well as his broadcasting experience in Scottish and UK BBC political programmes), his knowledge and understanding of the post-2014 Scottish political landscape is abundant. Tsunami is the third instalment of a three-part exploration of Scottish Independence following Road to Referendum and Disunited Kingdom: How Westminster Won a Referendum but Lost Scotland. Although it is the final analysis of this trilogy, Tsunami is more than capable of being a potently comprehensive stand-alone account of contemporary Scottish politics.

In his introduction to Tsumani, Macwhirter states,  “In this book I ask whether the events the 2014/15 constitute a revolutionary challenge to the established political order which will lead to the end of the Union.” Macwhiter then proceeds to provide an in depth analysis of the aftermath of Scotland’s 2014 Independence Referendum. He explores several components of the Scottish political landscape, from Alex Salmond’s resignation on the day following the 55% ‘No vote’ majority success for the BetterTogether campaign and unionist voters; to the SNP’s increasing popularity and Scottish Labour’s fall from grace; to the crucial involvement and efforts of break-away Independence campaign moments such as Women For Independence, the Radical Independence Campaign and The National Collective, and Nicola Sturgeon’s ‘star image’ amongst the Scottish electorate following her party’s 2015 domination of Scottish seats in the Westminster parliament.

Considering the dramatic shift in Scottish and British politics following the 2014 Independence Referendum, the explosion of publications covering the topic is not unforeseen. Academic accounts provide extended insight for those studying within the political field, whilst newspapers and online news websites reach out to a broader public, but there are few publications as in depth and easy to digest as Macwhirter’s Tsunami. He explains that a “glance at the new political map of the UK shows that the old politics of class have been replaced by the politics of nation”, and that, “[Scots] have taken to politics the way people used to follow football.” Just as the Independence campaign reached out to those who usually would not involve themselves in the political arena (perhaps due to the apparent inaccessibility with the vast majority of MPs and candidates holding degrees of some sort, and the political jargon often used in the debating chambers), publications like Tsunami reach out to a much wider audience with its easily comprehensible diction and casual explanations: “But the Declaration of Arbroath in 1320 remains a defiant statement against tyranny and divine right. It said, essentially, that if King Robert I didn’t shape up, the ‘community of the realm’ had every right to replace him with someone who did.”

Macwhirter’s thorough exploration of Scottish Nationalism coupled with his extensive analysis on the extent of nationalism on the Union is what sets this publication apart from detailed academic accounts of the Referendum. He concludes that, the “politics of these islands will never be the same”, and that Scottish and a British politics “turbocharged by the internet” is moving into a new era where Scotland will be more fairly represented within the English and Unionist dominated Westminster parliament, perhaps under a model Federalism (although he also explores whether this would be viable within the British political system).

Tsunami: Scotland’s Democratic Revolution is a robustly comprehensive analysis on the effects of the Scottish Independence Referendum on the wider British political landscape. Whether from an academic perspective or simply out of curiosity, this publication is a must-read for those seeking to gain a detailed understanding of contemporary Scottish politics.