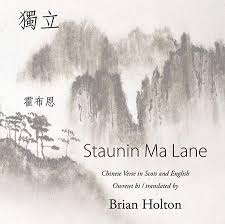 In Staunin Ma Lane, Holton has selected classical Chinese poems from the 11th century BC to the 14th century AD, some of them well-known to generations of Chinese schoolchildren, for improvisation and translation into Scots, with English “glosses”.

Holton states in his useful Afterword: “if you expect to find dictionary definitions of Chinese words in my translations, you will be disappointed. That sort of drably mechanical ‘accuracy’ does not make poetry, and a poem that doesn’t move the reader is like a joke that isn’t funny”. Rather, Holton conveys the energy and feeling of the original, retaining some allusions to Chinese history, culture and landscape but also borrowing from Gaelic refrains and Border Ballads, from Robert Burns and Gawain Douglas. Orioles become yellowhammers; mulberries are rowans; Paradise is Tir na nÓg.

Holton’s translations of poems attributed to Qu Yuan, the first named poet in recorded Chinese history, are particular gems, especially given the complexity of the language of 2500 years ago and the richness of imagery and symbolism (much of it associated with ancient myths and shamanistic rituals). The glorious sounds and images in these poems are perfectly conveyed in Holton’s translations, fizzing with the dazzling splendour of gold and jade, swords and crowns, flowers and spices (“mappiemou mait, ay, an mats o the mascorn/pour the cannel yill, see, the pepperie brose”). A sensual and emotional feast!

The cadence and imagery of the Scots poems have an astonishing richness and beauty which is absent from the English glosses.  For example, the opening poem by Li Bai “Frae the Hairt, Fou in Springtime” ends, in the Scots translation:

A sang a rant, waitin on the mune,
an forgot aa else yince it wis sung.

Holton glosses this more prosaically in English as:

I sang a ranting song, waiting for the moon,
and forgot all else once I’d sung it.

Even without any knowledge of Chinese, the formality of the original poems is apparent on the page. Often they are exact quadrants, with repeated characters, and therefore repeated sounds, towards the end of lines, reminiscent of the containing, constraining properties of sonnets.  Chinese logograms lend themselves to this regularity of shape in ways which the phonemic alphabet of Scots and English does not but Holton manages to convey the importance and formality of shape, nonetheless, by centring his Scots and English versions and by imitating and exploding the shapes of the originals as closely as he can.

In an adaptation of “Shaonan No. 20”, considerable departures are deliberately made from the original text in which the first line of each stanza is a refrain, “plums are falling from the trees”, and the number of plums falling in each of the three stanzas increases with the urgency of the speaker, urging her suitor to woo her. These simple images, expressed in short lines, work beautifully in the Chinese, but couldn’t prevail by “accurate and mechanical translation”. Holton’s brief to improvise in the manner of a Scots folksong results in the refrain, “gean an rowan fresh an fair/ heather white an gowan rare”. This may have nothing to do with the number of ripe plums to be collected, but translates the context beautifully as well as the sensuousness of the Chinese original into Scots. Holton also adds his own fourth stanza to reinforce the woman’s urgency in the absence of the numerical progression:

gean an rowan fresh an fair
heather white an gowan rare
gin ye lou me
woo me nou, for A winna stay!

The archaisms of the classical Chinese language, the multiple meanings of individual Chinese characters, as well as the very different cultural allusions must surely have made translation a daunting task. But if so, it never shows.  There’s a natural ease to Holton’s Scots which belies the compromises which translation necessarily incurs when qualities of sight and sound, meaning and allusion jostle for survival in each line. Holton’s improvisations, translations and cover versions – faithful and playful, confident and experimental – make classical Chinese poetry both highly accessible and hugely enjoyable.