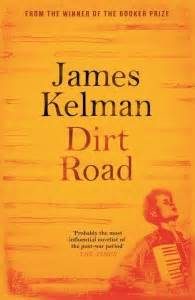 Dirt Road, James Kelman’s latest novel, opens at the outset of a journey; Murdo, a sixteen-year-old accordionist, and his father, Tom, are travelling from Scotland to visit relatives in Alabama. Where one might expect feelings of excitement, the anticipation of an adventure, there is instead a solemn atmosphere. Murdo’s mother has recently passed away from the same cancer which a few years earlier had taken the life of his sister. We get the sense that this trip to America is less a holiday than a desperate attempt by father and son to recover from their grief.

Written in a meticulously rendered stream-of-consciousness style, the novel takes us deep into Murdo’s rich interiority. The language used is simple yet manages to seamlessly convey both Murdo’s complexity of thought and his emotional depth, which tragically he is unable to communicate. Murdo is stuck in an angst-ridden state of wanting desperately to be understood and simultaneously needing to assert his own individuality. The only way he feels he can do either of these things is by playing accordion.

Murdo’s greatest passion is music and the novel is appropriately filled with a sensual musicality which perfectly articulates Murdo’s keen awareness of the various tones and rhythms of the sounds around him. At one point he begins to contemplate the letters of the alphabet:

Language, in Murdo’s mind, is entirely inseparable from sound, and sound often carries a deep emotional significance. The idea that something as simple as the letter ‘m’ could send Murdo off on a profound consideration of mortality shows us that Murdo is obviously a highly accomplished musician whose sense of the world around him is largely constructed from sound.

Yet for all the music in Murdo’s mind, silence dominates the interactions between him and his father. The little communication which does occur between them is seldom constructive or supportive. When Murdo tells his father that he wants to quit school so that he can get a job and become self-reliant, Tom is unwilling to even consider this possibility. Tom also spends much of his energy rebuking Murdo for perceived wrongdoings which often border on the absurd. He becomes angry with Murdo, for example, when Murdo opens a sandwich to look at its contents before eating it (Tom thinks that this is rude).

Using pitch-perfect language befitting his young age, Murdo’s inner thoughts convincingly capture his strong sense of entrapment: “Oh I thought it was my life? Oh no, it belongs to him over there, yer father.” But as domineering as Tom is, Kelman at no point makes him seem like a bad person. Instead, we feel that Tom’s anxiety and his desire to control Murdo’s life is a direct result of his grief. He comes across as a man who is utterly terrified of losing the little family he has left, and while we sympathise with Murdo’s desire for independence we can also fully understand his father’s reluctance to give it to him.

As father and son travel through the southern states of America, Murdo befriends various musicians from many different walks of life who begin to give him a sense of community for the first time in a long while. We see Murdo become more and more self-assured as the novel progresses, and Tom, recognising this newfound confidence, is eventually forced to loosen the oppressive hold he has on his son. Through his authentic characterisation and beautiful melodious language, Kelman has created a deeply affecting and life-affirming tale about grief, family, and the healing power of art.