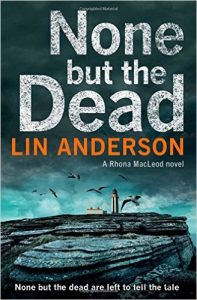 I must admit I felt a little strange looking in on what looked like an ancient muslin flower which might have fallen from Miss Havisham’s veil…I immediately felt it could be the core of a Rhona book.

This is how the author describes how None but the Dead was “born”.  Lin Anderson is an exponent of Tartan Noir, a genre which, it could be argued, (as indeed it is by the Scottish Book Trust), can trace its roots as far back as Robert Louis Stevenson’s The Strange Case of Dr. Jekyll and Mr. Hyde, written in 1886 or even James Hogg’s The Private Memoirs and Confessions of a Justified Sinner, written in 1824, although the term was not coined until much later, of course.  Anderson herself is a founder member of Bloody Scotland, a Tartan Noir and Scottish crime writers’ festival, held in Stirling since 2012.

Anderson’s explanation of the beginnings of None but the Dead seems like such a small thing from which to develop into everything a detective story should be but it did – and more besides.  Rhona MacLeod, the heroine, is a forensic scientist rather than a detective but there is no dry description of laboratory analysis.  There are several deaths but there is no sense of simply piling on the mortality count for sensational effect.  All the characters are well-rounded (even the  minor ones) and believable.  The author remarked that she is “still discovering things” about the main character, although Rhona has been around since 2003.

The most significant player in the novel is, however, Sanday.  Sanday is not a person but an island in the Orkneys.  It is not, though, merely the main setting for the story.  The island (and particularly the weather), personified in the novel, plays a very active part in proceedings in lines such as, “he mistrusted the sand’s intentions, believing its real goal was to suck him down,”  “the water reached its freezing hand” and  “the current tugged at her legs, keen to show her who was in charge”.  These are more than merely metaphors as they imply wilful intent.  Professor Magnus Pirie, a criminal profiler in the novel, spells it out, when he comments, “My ancestors regarded the weather as a personal foe with whom they had to cope” and to which (or whom) they referred as “he”.

The detective from Glasgow cannot cope with the island at all.  He has nothing to help him solve a crime apart from his own skills: there is no internet, no CCTV and not even a police station on Sanday.  There is a small plane but the weather often prevents it from flying, and the ferry often cannot cross because the sea is too rough.  McNab, from Glasgow, hates the emptiness (as he sees it) but the policeman who was born on Sanday knows his part of the island as well as McNab knows his part of Glasgow.

The plot is intricate, covering more than one time period, two locations, several murders and a missing person search, but there is no confusion.  There are heart stopping moments and the denouement is satisfying, although I am ashamed to admit that. To reveal the reason would give away too much of the plot (surely taboo when reviewing a detective story) but suffice to say that the island and the elements took care of an important matter while the islanders helped the innocent.  There is even an unanswered question regarding one of the characters at the end and I look forward to the next Rhona Macleod novel so that I can find out the answer.  In the meantime, I intend to read the other eleven books about this forensic detective as I, too, want to find out more about her, which must – of course — show how much I enjoyed this book.