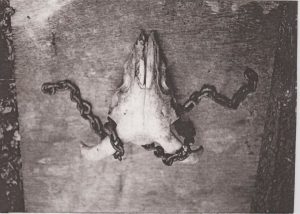 The Girls Will Be Beuys exhibition has been created at the invitation of The Collective Responsible For, an international artists’ collective founded in Dundee and concerned with making art with conceptual integrity and feeling.  The collective is inspired by the work of Joseph Beuys, especially his belief in the transformative power of art.

When, early in 2016, a group of final year students created an exhibition which declared that ‘Boys Will Be Beuys’, a riposte swiftly appeared in the form of Girls Will Be Beuys.  Numerous mysterious messages and artworks were anonymously exchanged, being left in various locations in the art college; the activity culminated during Degree Show week. Some of this activity is documented in the zine which accompanies the event and which is available for purchase. Key to the exchanges, and underpinned by Beuys’ maxim that art is for everyone, was the question of the role of women in contemporary art, and the commitment of  Beuysian thought  to changing  the human environment for the better through Social Sculpture.

Busker’s music venue and bar has had a succession of different identities in recent years but was a church until a few decades ago. On the opening night a roll top bath was placed approximately where the altar or communion table of the church would once have been, and was the focus of the night’s ritual. The artist, Morgan Atkinson, entered wearing a metallic grey swimsuit and accompanied by three female acolytes. One smeared the artist’s body with lard, and she entered the bath. One of the attendants poured a bucketful of ice cubes and water into the bath. Over the next ten minutes the attendants brought successive buckets of water, many boiling hot (supplied by an urn offstage). Balancing her slippery limbs on the side of the bath the victim of the ritual placed her body carefully, tentatively in the water, stirring it to make it bearable. Finally, when it became more than she could stand, she left the stage and wrapped herself in a golden foil survival blanket with a red cross on the back. Beuysian symbolism (lard, the Red Cross, bath) and philosophy (transformation and its attendant pain) were apparent throughout. The use of the female body to symbolise the idea of alchemical transformation worked effectively to making us consider the pain of the object as well as the work of the alchemist. In the process the object/artist were unified.

The upstairs gallery of the venue displayed a range of thought-provoking exhibits, all embodying the idea of mutability and transformation. Key works included Tamara Richardson’s abandoned bar and her lightbox sign reminding us that “These spaces are getting fewer and fewer”. While this might be taken to reflect the immediate surroundings of the exhibition in a building which has seen many different roles, it could also be read in reference to wider societal issues and the role of art. Nearby was an extraordinary hybrid object  by Jasmine Summerton, at first sight a giant crutch, too long to be of any use, unless as some form of implement, for the lower half was a spade which seemed old, but highly polished. Questions of transformation were also addressed in Sandra Schneider’s “A Text in Five Rooms”, poems concerning the acquisition and alteration of materials, while Naya Magaliou’s evocative video works “Our Father” and “Who art in Heaven” showed transformations of the body. The latter, showing a woman apparently undergoing a ritual cleansing, echoed the transformation performance we had just seen. Morgan Atkinson’s set of drawings, the “Venus Collection” depicted the seven stages of the alchemic process. There was a strong coherence underlying the works on display.

This was an imaginative and multi-faceted response to a tongue-in-cheek but important challenge.  On this showing, Girls are Beuys indeed.