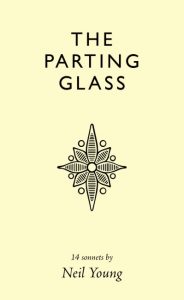 The Parting Glass is a collection of 14 sonnets by Northern Irish poet, Neil Young, long resident in Scotland. True to its title, each sonnet is a farewell to a beloved family member or a friend, a toast to memories – private and public, and a nod to the present that will soon be lost.

That Irish-Scots tradition suggested in the title is the collection’s main theme. Each sonnet is a variant of the parting glass – a song of farewell, a toast to the past that remains only as a series of images to the present experience, which, as the poet keenly recognizes, is already becoming the past. The collection contains deeply personal poems – about Saturday afternoons spent with his father (“The Lock-up”, 1969), his mother’s “holiday self” slipping out during a wedding-night at Troon (“Neat Gin and Show Bands”), games with schoolmates (“Playground Cracks”), a day on the beach with his daughter (“Sand Dancing”), and the passing of an old friend (“The Parting Glass”).

Perhaps as an ode to the form itself, it also articulates a more public conscience. There is a poem on Irish boys who died in the First World War (“Shankill Boys on the Somme”), another addressed to Wilfred Owen (“The Pity of It”), and an ekphrastic poem on the photo of an Israeli schoolgirl whose fate is unknown (“Photo of a girl on the Rafah to Gaza Road”). So when Neil Young chooses to explore familiar experiences, differing only in detail – his father stretched beneath the chassis of a Hillman Minx, receiving Facebook notifications to wish a deceased friend on the latter’s birthday, shaken at the sight of his daughter on the beach thinking of Syrian children – he takes on a unique challenge. To transform a subject from that which is not only familiar but also deeply felt, the poet must elevate his work in an intensity of music, image or style. The stuff of poetry is, after all, quite familiar. Talking about a flea becoming a marriage bed, likening lovers to bloody buses, and chess players to gods is as much a subject for poetry as it is of our daily experience.

For the poet’s purpose, the sonnet proves a particularly useful form. Its loquaciousness, easy movement between the public and private spheres, and self-conscious membership of a tradition, are conventions which structure this collection. But, sometimes, it seems as though the form carries the poet’s voice, rather than the other way around. In The Parting Glass, Young sticks to no particular variant of sonnet, except for his preference for a rhymed final couplet. This is a consistent feature of most of these sonnets. Often the final couplet picks up the same image as the one in the opening of the poem. For example, in “Playground Cracks”:

Cracks in the concrete are all that remain…
These cracks don’t show or say.

This formal choice sometimes induces the reader to feel that while an image has been captured well within the square of the sonnet, the energy of the experience has escaped.

In some pieces, however, Young breaks from the evenness of his tone, either through a sound use of verbs,

I slip/ His reach in a scrum of new shoes and run/ the thirty feet in one gulp up the hill (“The Handover”)[,]

or with language that urges the form to keep pace,

now you’ve really torn the arse out of it/ And all my best words can’t make you less dead (“The Parting Glass”).

These bursts leave a deeper impression because they are so rare, and occur when the themes of the collection – grief, parting, memory and time, all afford excellent opportunity for the poet to unwrap a deeper reality from its film of comfort. We may have fewer glimpses of these than we’d like, but it does not seem for want of sincere effort.