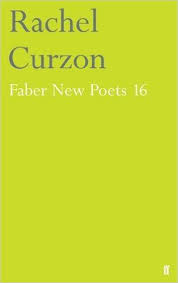 Published under the Faber New Poets initiative and funded by Arts Council England, this is Rachel Curzon’s first collection of published poems. The poet, born in Leeds in 1978, studied English at Oxford and now teaches at a boys’ school in Hampshire. She won the Eric Gregory Award in 2007 and her poems have been published in Rialto, Poetry London and Magma.

Curzon’s poetry takes nothing for granted. Each of her poems questions existence and how we experience it. “Hydra”, which opens the collection, plunges the reader straight in to an existential crisis, evoking a sense of loneliness and disconnectedness. The narrator does not identify her/himself but it is obvious that s/he is just newly arrived in an unfamiliar environment in the second stanza,

When I stepped down onto the platform
I pretended to look for someone I knew.

Whatever they tell you, the sky is particular.
There is no one looking at the moon
just at this moment and thinking of me
but if there were, I would lean out above the quiet street
and shout anyway it is the wrong moon.

The narrator expresses anger and bewilderment at her circumstances, yet there is a suggestion that what is being described is an internal landscape.

Unusual musical instruments turn up in the collection.  Consider “Advice from Marianne Davies in which she Expounds upon the Perils of Mr Franklin’s Glass Armonica”, which does indeed relate to the titular instrument, reputed to drive listeners mad. Here Curzon describes its sound:

In “Master”, the narrator appears to have been a teacher at an old-fashioned boarding school for young boys. He is remembering what it was like; the all-pervasive music, the constant ringing of bells. He muses on how he might have learned to play the cello, but recalls,

I never used to like the sound of a cor anglais
But it has grown on me.

The narrator, reliving his career, seems not to question the school rules that stamp out all natural expression,

When it snowed, no one was permitted
To walk across the quad. The boys clamoured for snowmen.
Oh, they were quite impossible for snowmen.

Indeed, his unacknowledged need for affection was never satisfied. His loneliness is expressed in those short, clipped sentences.

The final poem in the collection, “Happy Ending” conjures a bleak image of neglect, as it opens with

The baby in the tree has cried all day.
There is nothing to suck on, up there.

The baby is left alone as dusk falls. Curzon evokes an almost unbearable sense of urgency, and anxiety for the baby’s welfare, whilst simultaneously recording the narrator’s dispassionate observations on the baby’s distress.The reader is left to wonder at how such a scenario could have been imagined. It reads like the cruellest interpretation of the nursery rhyme, “Hush-a-bye, Baby, on the tree-top”.When finally, the baby’s mother appears, “with a smile on her mouth”, she seems unrepentant of her actions, saying “Now will you hush now will you?” Considering the likely emotional impact on a child in such a situation, the poem’s title could easily be taken as a superb piece of irony. However, considering the ending in the nursery rhyme, “down will come baby, cradle and all”, perhaps the outcome for the baby in this poem is not so damaging… or is it?

These images and many others in the collection add up to an intensely heightened sense of alienation and opposition to an ordinary accepted reality. But the talent for evoking existential crises so imaginatively lies firmly in the hands of this poet, whose voice is urgent and immediate.