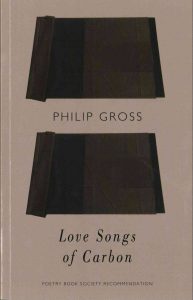 Philip Gross dealt with death and ageing in his 2013 collection, Later, and with elemental forces in the T.S. Eliot Prize winning The Water Table, published in 2009. Love Songs of Carbon unites these interests in an extended contemplation of the molecule as the building block of life. In Love Songs, the ageing process is met at first with inquisitiveness and a fascination with the materiality of the body, and later with an exhilarated sense of freedom.

Early poems such as “Mould Music” compare human life to the “self- // engorgement of the peach / then its shrivelling”, and celebrate yeasts, “our secret sharers, in our creases, / under finger and toe nails”. In “A Love Song of Carbon”, the scattered ashes of two friends mingle not only with each other, but are whipped by a “wet wind” back onto the bodies of the scatterers. Gross embraces these moments of uncanny contact with death. Death for him is as everyday as matter – nothing more than a change in material state – and yet as mysterious as deep time and cosmic distance. Carbon is the emblem of this paradox throughout the collection; diamond is, for instance,

the same stuff as us, as life, but
gone to heaven, so
emptied of itself, all weakness, so
inhabited by light.

Later poems such as “Small Songs of Carbon”, from which these lines are taken, evince Gross’s Quakerism, and his belief in the inner light of the soul, but also a rallying excitement at the prospect of finally confronting the “strata, fold on fold” of that “dark bedtime” which will reassure even the most assured atheists (“Thirteen Ways to Fold the Darkness”).

how a twenty-mile-wide swell
comes unpicking the seam of itself
down the slant of the sea wall,

how it gathers up
its skirts and leans
into a head-down hunching run.

The neighbours “hop, skip and stumble[e]” gleefully “back from the edge”, left “a little breathless” by the “victory” of surviving the waves with only a “wet sock” and a sublime sense of being “So very here. So very small.” In “Love in the Scanner”, two young volunteers on a scientific research project have sex in an MRI machine; in “Fire Balloon Heart”, a young couple struggle to ignite a Chinese lantern in a charged Valentine’s Day encounter – but for the middle-aged speaker and the partner to whom the collection is addressed, “hearts as tough / as lorry tyres” make for the kind of bond “an archaeologist would recognise” in the entwined burial remains of mummified lovers (“The Shapes They Make”).

Towards the end of the collection there is a loosening or expansion in poetic form which images both a “delight, jouissance, a fine / discontent at molecular level” (“Brownian Motion”), and conversely an awe at “the huge, the cosmic tidiness” of a loss of dimensions (“Thirteen Ways to Fold the Darkness”). If the first stanza of the first poem in the collection, an ekphrastic work on the late style of Paul Klee, seems rather clichéd (“See the effort of scraping the paint across that surface. Almost pain”), this is certainly not the case for the collection as a whole; reading Love Songs in its entirety in a couple of hours turned out to be an invigorating experience. Gross has elevated the “rage” of his adopted countryman, Dylan Thomas, who would “not go gentle into that good night”, to a more constructive entreaty to be

the bold bald mark on what

you can lay your hands on, be

the drum skin
beating till it rips.