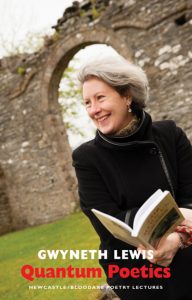 Firstly, Newcastle University and Bloodaxe Books must be congratulated for instigating and publishing this innovative series of lectures. Quantum Poetics gathers three given by former Welsh National Poet Gwyneth Lewis. Though highly engaging and accessible, these are not for the dabbler. Quantum Poetics in its entirety “begin[s] to posit not the science in poetry but a science of the art form[.]”, examining where “the poet steers a path between making music and making sense – not at the level of the line, but in the deep structures of meaning”.

The first of these lectures “The Stronger Life” challenges lazy stereotypes of the vulnerable, depressive poet, in an unstoppable downward spiral. When Lewis hones her argument, explaining the poet’s choices in inhabiting the inhospitable, she is well-qualified, previously having written courageously of her own depression and alcoholism. She offers a structured analysis of poetry’s positive and negative effects on the writer’s psyche, one person’s muse being another’s “toxin-bearer”.

Whilst there, she detonates myths of “cathartic” primal rage. The too-ready notion that towering emotion is only truly expressed in vers libre is shredded by the self-described formalist’s examination of the “uncertainty of enjambment” and more, where “words are scarecrows – not the aim of a search, but merely symbols to distract scavengers”.  Shades of Julia Kristeva perhaps? Lewis closes, tying her art to Peter Higgs’ research, and introduces her second lecture “What Country, Friends, Is This?” aiming to find “the deep structure of the art. It’s a quantum field of potential.”

Who better than a Welsh woman to investigate the politics of language’s often opposing dynamics? Using Shakespeare’s “Illyria”, she journeys to chart “a quantum centre – note not the centre – and it behaves in a spectacularly unexpected manner.” She owns “being bilingual in Welsh and English from an early age weaned me from the idea of a linguistic centre.” Her linguistic investigation, both personally and more generally, may run counter to general perceptions: “Never assume that members of any minority are cosy in that community.” Lewis’ likening of language systems to aquifers makes particularly fine reading. Similarly, her description of writing the forward drive of narrative powerfully harnessed by the backwards path closed form line endings demand makes compelling sense. If the poet’s location of Illyria finds an internal “pre-verbal and pre-lyrical wet place (Kristeva-like again) may have universal creative applications, clearly her specifically Welsh experience was formative. Again, closing this lecture, she frames the next – “Quantum Poetics”, where Lewis explores “poetic form in relation to quantum physics”.

Her first target in the final lecture is metaphor, an aspect she deems more fundamental than rhythm or rhyme, and she begins in Skaldic verse’s riddled concerns. Naturally, she moves into her nation’s mathematically and poetically-nuanced Cynghanedd, that harp-led medieval system which is arguably still the most complex series of patterns known in any world poetry, where “words spark off each other”. Here, as a non-Welsh speaker, I would have benefitted greatly from hearing her annotated examples. Those who heard Lewis’ National Poet successor Gillian Clarke’s StAnza 2013 lecture will doubly value these passages. If the poet starts in medieval systems, throughout the book her sweep involves many poetic luminaries – Dylan Thomas and Manley Hopkins of course, but her ear is tuned to several Irish poets (notably Paul Muldoon and Eiléan Ní Chuilleanáin) and our own W.H. Herbert. Equally she casts beyond Celts trawling continents and ages. These are difficult, but rewarding waters; the serious poet will wish to navigate them from the “creative despair” through to “the forest of the unconscious”. Finally, Lewis asks “Where do poets live?” and answers in Hugo of St Victor’s words: “The man who finds his homeland sweet is still a tender beginner; he to whom every soil is as his native one is already strong; but he is perfect to whom the entire world is as a foreign land.”