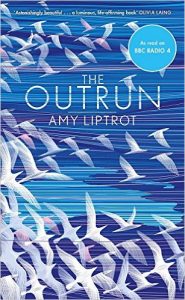 This debut work of non-fiction has already received widespread critical acclaim – this year, it was shortlisted for the Wellcome Prize, and won the Wainwright Golden Beer Prize.  As The Outrun is a memoir of Liptrot’s slide into alcoholism, and her efforts to remain sober by returning to the place of her birth and raising, Orkney, I’m sure that the irony of the sponsorship of this latter award was lost on neither the author nor on her publisher, Canongate.

The eponymous “Outrun” is a coastal field which is part of her parents’ farm on Orkney, to which Liptrot escapes after becoming aware of her increasing dependence on alcohol following a 10 year sojourn in London. So, the tale of the prodigal daughter (whose baggage is legion, derived from the parenting of her mentally unstable father and born-again Christian mother) returned from the big city to her childhood home, turns out to be more of a story of a reconnection with the natural world – an everyday supportive soundtrack to Liptrot coping as a constantly recovering alcoholic. Even the shore and the tides try to tempt her back to her old proclivities: “One morning… I see a plastic bottle among the rocks…a Finnish vodka bottle…with about a shot’s worth left inside.  I open it and take a deep smell.”

The Outrun is an enjoyable, readable piece of non-fiction, but unnecessary explanations are littered throughout: on the very first page we are told that Orkney is “a group of islands at the north of Scotland”.  “’Muckle’ means big”, Lerwick is “in Shetland” and Munros are “hills in Scotland of more than 3000 feet”.  Other words are explained as Orcadian, including “selkie” and “flitting”, both of which are part of the Scots’ dialect, and have broader origins.  A sweeping statement that first footing is “a tradition once common all over Scotland but now mostly forgotten” makes one wonder what the author’s experience of the tradition is – at the age of 30, she tells us that she had already spent 10 years in London. Whilst first footing might no longer be as popular in Scotland as it once was, it is by no means “mostly forgotten”.

There is missing punctuation, the odd misspelling -“whoolie” and excessive repetition, be that paragraphs expressing certain previously aired thoughts, or recurring words and phrases within the same sections. Cultural references seem to be quite deliberately absent, especially from the London sections. In fact, some of the only references to music and fashion are retrospective ones, so that “fifties housewives in gingham dresses” and “eighties aerobics teacher” give us no more a clue as to the historical context than the pub karaoke – “badly tuned versions of ‘Mustang Sally’ and ‘My Way’.”  The shadowy figure of the author’s boyfriend is no more fleshed out than the driftwood Liptrot gathers.  She spent two years with this man, and their break-up is the origin of so much subsequent soul-searching, but we know no more about him than we do about the London she lives in; both are characters the reader wishes to see in glorious technicolour rather than the monochrome sketches we are presented with.

All things considered, this is still a good book filled with wonderful writing, especially when it comes to describing the natural landscape of Orkney; it certainly deserves its acclaim and awards for that alone.  The final two sentences are testament to the author’s descriptive skill: “The last two years stretch and glitter behind me like the wake of the ferry.  The powers are churning inside me.”

With the talent and honesty which the author clearly possesses, there is surely a shorter and more finely crafted memoir which breathes within The Outrun.