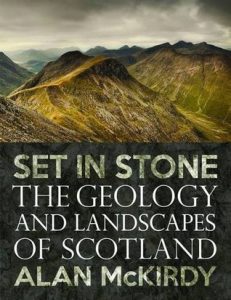 Alan McKirdy’s first claim in Set in Stone is: “I am a geologist by accident rather than by design!” A happy accident, as it turns out, as McKirdy’s enthusiasm shines through in his book. Set in Stone is an attractive study of Scotland’s geology for several reasons. The most obvious of these reasons is the abundance of photographs and illustrations. This is complemented by a clear, compact structure. Each picture is accompanied by a condensed version of the information contained in the main text. This has the double advantage that readers can either skim read but still get a good idea of the core ideas presented in the book, or that information is repeated, making it easier to remember.

However, this can sometimes be a drawback, particularly if the facts are quite distinctive. For instance, on page thirty-four: “Rocks derived from processes related to volcanoes are known as igneous” is repeated for the fifth (but not the last) time. These repetitions are perhaps not too noticeable for two reasons. Set in Stone is thematically diverse, in the sense that McKirdy also delves into palaeontology and environmentalism, and the repetitions are alleviated by McKirdy’s enthusiasm. At times, this passion can run away with him and appear literally as exclamations marks when they are not necessarily required. However, both of these points are negligible. A more serious drawback is the occasional omission of information. For example, in the geological timeline on pages fourteen and fifteen, he correctly describes the Jurassic period as the “age of dinosaurs”, but does not mention that dinosaurs were still the dominant group of animals during the ensuing Cretaceous period. Considering Set in Stone is not a book about palaeontology, this may seem like a minor point. However, it is a book for the layman, and readers who are unfamiliar with the fauna of geological periods might think that the dinosaurs went extinct at the end of the Jurassic period.

McKirdy does an excellent job of introducing geology to the general public otherwise. Some facts, such as the movement of tectonic plates, may already be known. Others, such as: “Pettico Wick near St Abbs shows folds and buckles that resulted from the continental collision between Scotland and England” are perhaps less well known. Another laudable aspect of Set in Stone is that it addresses current topics, such as humanity’s influence on the environment, without being righteous: “‘Save the Planet’ protesters slightly miss the point! Planet Earth will sail on for a few billion years more regardless of what environmental insults we throw at it.” McKirdy points out the effects of environmental changes on lifestyle rather than advocating recycling and electric cars. It is thus up to the reader to decide whether they wish to accelerate the frequency with which landslides, floods and other natural catastrophes occur.

However, the geology of Scotland remains the primary focus of Set in Stone. McKirdy makes no promises that reader will be able to share his enthusiasm for geology, but he hopes “you enjoy reading this book as much as I did writing it.” But perhaps “reading” is the wrong term. This is not so much a book to read as it is one to experience.