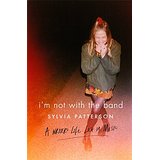 Sylvia Patterson’s I’m Not with the Band describes a three-decade long love affair with music. The esteemed journalist’s turbulent life is set against the highs and eventual lows of pop music and the media business she worked in. Her writing, like her first job in music journalism, magazine Smash Hits, mixes silly anecdotes (the favoured interview question at the magazine being ‘[h]ave you ever grown parsnips in a gumboot?’) with deeper, more meaningful passages, most notably the sequences involving her family.

This juxtaposition of humour and tragedy, and the accompanying entertaining nonsense and commentary on drug abuse, feminism and the invading nature of journalism are what gives Patterson’s memoir depth.

The structure is chronological, documenting Patterson’s upbringing in Scotland, early employment as a journalist at Dundee’s DC Thomson (which is certainly not remembered fondly), then the highs of working at Smash Hits before becoming a freelance writer for NME and Glamour. Later chapters focus on interviews with musicians, with Patterson interweaving her own experiences with major developments in pop music through the eighties, nineties, and noughties. Stand out sequences include asking a newly-wed Prince (the artist formerly known as Prince) what he does ‘with ill-timed erections’ and discussing with new mother Madonna the idea of eating placenta in the form of paté. These humorous questions, show a humbler side to the notorious pop icons.

The humour is balanced with more thought provoking insights into the nature of pop music. Described by Patterson as “sculpted from an obelisk of purist cynicism, purpose-built to replace Boyzone” and with “no proper-pop qualities whatsoever”, Westlife take quite a bashing. After failing to rise to Patterson’s baited questions, the young Irishmen defend their mass-produced pop as “just the way it is now”, sadly opposing Patterson’s view of pop music as being about “youth, celebration, escapism and life.”  Here, Patterson distinctly marks the influence Smash Hits had on her writing as humour and silliness coincides with music criticism.

Employing the same colloquial style of writing Smash Hits was famed for, Patterson often adds one word sentence commentaries, making her work reminiscent of a diary entry and so developing an intimacy with the reader. These entries consist of British slang such as and on one occasion describes her boyfriend’s only form of exercise as “occasionally jog[ging] round to the newsagents to get some fags’ followed by the word ‘[s]woon’.

Similar centred on a female vision of pop-culture, this language and intimate form is delightfully reminiscent of the young narrator in Louise Rennison’s Georgia Nicholson series, employing a distinctly British style of writing. However, this casual use of first person narration is now sadly overcast by its use in E. L. James 50 Shades series, and is one of the most criticised aspects of the novels. Distracting though this style is, it doesn’t hurt Patterson’s memoir, but rather adds to the youthful and ‘poppy’ panache of her writing.

Patterson’s memoir maps a life devoted to music, illustrating the inner workings of an often-criticised industry, and raising the standards in the media by which pop music is assessed. While hilarious at some points and emphasising the joy music has brought her, Patterson also captures the power of music in tragedy with a brief line describing her brother’s funeral when choosing the hymns for the service was the ‘first and only time [she] ever saw [her] father openly weep.’ But, with pop music described by herself as being about life rather than death, Patterson continues her career and love affair with music, after resigning from NME, on her own terms.